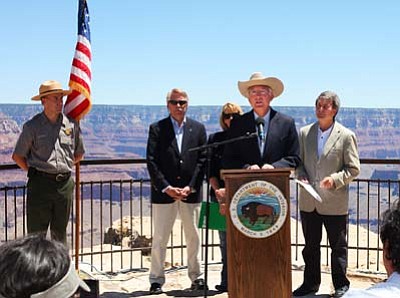 "This landmark decision closes the door on rampant industrialization of Grand Canyon's watersheds," said Roger Clark of the Grand Canyon Trust. "Uranium mining imposes well documented and unacceptable risks to the people and natural resources of our region."

On July 21, 2009, Interior Secretary Ken Salazar issued a two-year order banning new mining claims across 1 million acres of public lands around the world-famous national park - a ban made final and long-term on Jan. 9.

"A withdrawal is the right approach for this priceless American landscape," Salazar said. "People from all over the country and around the world come to visit the Grand Canyon. Numerous American Indian tribes regard this magnificent icon as a sacred place and millions of people in the Colorado River Basin depend on the river for drinking water, irrigation, industrial and environmental use. We have been entrusted to care for and protect our precious environmental and cultural resources, and we have chosen a responsible path that makes sense for this and future generations."

The Public Land Order to withdraw these acres for 20 years from new mining claims and sites under the 1872 Mining Law, subject to valid existing rights, is authorized by the Federal Land Policy and Management Act. A Record of Decision was signed by the Secretary today during a ceremony held at the National Geographic Museum in Washington, D.C.

"Grand Canyon National Park is an international icon, a biodiversity hotspot and the economic engine for much of the Southwest's tourist industry," said Taylor McKinnon, public lands campaigns director at the Center for Biological Diversity. "Today's decision deserves celebration - protecting Grand Canyon from more toxic uranium-mining pollution is the right thing to do."

"This is a great day for Grand Canyon National Park and all those who care about the park and the surround public lands, including the hundreds of thousands of individuals, hundreds of businesses and organizations, local governments and Native American tribes who have supported this proposal. We are pleased the Obama administration has taken this important action to protect the Grand Canyon's watershed and would like to also thank Representative Grijalva for his leadership on working to protect these lands," said Sandy Bahr, Sierra Club's Grand Canyon chapter director.

The withdrawal does not prohibit previously approved uranium mining, new projects that could be approved on claims and sites with valid existing rights. The withdrawal would allow other natural resource development in the area, including mineral leasing, geothermal leasing and mineral materials sales, to the extent consistent with the applicable land use plans. Approximately 3,200 mining claims are currently located in the withdrawal area.

"The withdrawal maintains the pace of hard rock mining, particularly uranium, near the Grand Canyon," said Bureau of Land Management Director Bob Abbey, "but also gives the Department a chance to monitor the impacts associated with uranium mining in this area. It preserves the ability of future decision-makers to make thoughtful decisions about managing this area of national environmental and cultural significance based on the best information available."

During the withdrawal period, the BLM projects that up to 11 uranium mines, including four that are currently approved, could still be developed based on valid pre-existing rights - meaning the jobs supported by mining in the area would increase or remain flat as compared to the current level, according to the BLM's analysis. By comparison, during the 1980s, nine uranium mines were developed on these lands and five were mined out. Without the withdrawal, there could be 30 uranium mines in the area over the next 20 years, including the four that are currently approved, with as many as six operating at one time, the Environmental Impact Statement (EIS) estimates.

The withdrawn area includes 355,874 acres of U.S. Forest Service land on the Kaibab National Forest; 626,678 acres of Bureau of Land Management lands; and 23,993 acres of split estate - where surface lands are held by other owners while subsurface minerals are owned by the federal government. The affected lands, all in the vicinity of the Grand Canyon or Grand Canyon National Park, are located in Mohave and Coconino Counties of Northern Arizona.

"The decision made today by the Secretary will help ensure continued protection of the Grand Canyon watershed and World Heritage designated Grand Canyon National Park," said National Park Service Director Jonathan B. Jarvis. "As stewards of our national parks, it is incumbent on all of us to continue to preserve our treasured landscapes, today and for future generations."

"The Grand Canyon is one of the wonders of the world. Standing by while it's enveloped by a tidal wave of uranium exploration and mining would be the wrong move," said Ted Zukoski, an attorney with the environmental law firm Earthjustice. "We applaud Secretary Salazar's action, and stand ready to defend the mining withdrawal from any ill-considered attack by the uranium industry."

Numerous cooperating agencies, tribes, counties and stakeholders were fully engaged in this process, which included an extensive public involvement period which generated more than 350,000 comments, including input from more than 90 countries. Substantive comments, including those on the economic impact discussion, were addressed in the Final EIS, released on Oct. 27, 2011 for a final 30-day review period.

Information on the withdrawal is at http://www.blm.gov/az/st/en/prog/mining/timeout.html or can be obtained by calling (602) 417-9504.