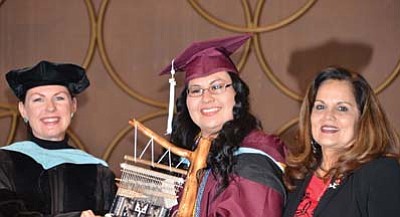 Jennifer Jackson-Wheeler received her Ph.D. in English while also serving as a full-time faculty at Maricopa Community Colleges. Jackson-Wheeler was responsible for creating Navajo language, culture and humanities curricula for the district as well as teaching courses. She also developed Navajo language curricula for the Phoenix Unified School District and ASU, all while working her way through the master's and Ph.D. programs.

Jackson-Wheeler noted that her experience teaching at a middle school in the Navajo Nation opened her eyes to "how we as educators need to show our American Indian youth that thinking about and having a vision of their future will help shape their educational goals."

Catrina Herbert graduated with a master's of early childhood education degree obtained through the Mashchamtam Early Childhood Education (ECE) program. The online degree program allowed Herbert to live in her home town of Tuba City, Ariz. while completing her coursework. The flexibility of this program allowed Herbert, a single mother of three young children, to remain an active and involved member of the community. She assisted in the pre-school class at Tuba City High School and mentored high school students who are participating in the ECE program. Herbert was also inducted into the Delta Kappa Pi Honor Society in Education, and participated in a project to package and distribute books and bears for underprivileged children.

Herbert is currently awaiting approval from the Tuba City School Board to begin her career as a kindergarten teacher. "Educators are the most essential source in contributing wisdom to guide our youth in their vision and planning," said Herbert. "However, teachers are not our only educators; they are found throughout our entire life, at home, in our community, in school, and most importantly found within us."

"The Heard Museum, an informal educational institution, has established the Outstanding Masters Graduate Award and Outstanding Doctoral Graduate Award to celebrate American Indian leadership in educational degree attainment," said Dr. Laura Burgis, vice president of institutional advancement. "It is our hope that with this prestigious recognition, these individuals, whom we celebrate tonight, will serve as role models for other students, to aspire to reach their personal best, and to share their talents with the community."