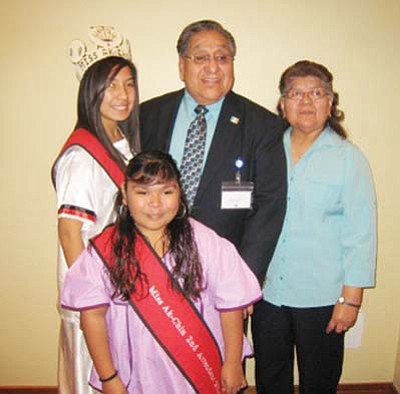 Chairman Shingoitewa was warmly welcomed by the newly elected GRIC leadership at the VIP reception, held at the Sheraton Wild Horse Pass Resort, where they made commitments to work toward positive intertribal relations. Chairman Shingoitewa congratulated the new leaders and presented a colorful gift of Hopi framed artwork to Governor Mendoza.

Chairman Shingoitewa dialogued with the many tribal, state, county and other officials in attendance, to discuss current issues and to establish partnerships to address mutual concerns.

Many members of the GRIC community participated in the inaugural celebration of their newly elected leadership. Most impressive was the presentation of the Governor and Lt. Governor by the GRIC youth, as they escorted their new leadership into the grand ballroom and sang traditional songs of their people, to the rhythm of gourd rattles.

The Governor and Lt. Governor told their people they are committed to seeking the highest quality of life, education and services for them and look toward a prosperous future. To close out his speech, Governor Mendoza said, "Let's get to work."