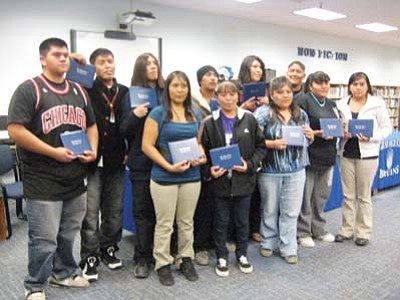 POLACCA, Ariz. - Holly Joy Lomatska was one of 16 mid-term graduates who were honored during a ceremony at Hopi High on Dec. 15.

Hopi Jr/Sr High Superintendent Paul Reynolds told the graduates they should take pride in their achievements and share them with those in the audience who supported them. The ceremony took place in a packed library where parents, relatives and friends joined the graduates with cake and punch after the graduates received their diplomas.

Hopi High Principal Glenn Gilman told the crowd that the 16 graduates all earned due respect for their achievements.

Lomatska is preparing for college, probably starting at Yavapai College to major in construction management. She was in the advanced radio broadcast class at Hopi High. She said the radio class taught her to be a people person, take notes, improve her speech skills and worked with radio equipment at KUYI.

"I also had some duties at the station which was answering phones to do birthday requests," she said.

Lomatska said all these skills will help her in college.

"I feel better prepared to go off to college," she said.

Lomatska said she will also consider radio broadcast for a career.

"Being a part of radio program helped me realize what it takes to be in the radio world," she said. "I feel that I can become a part of the radio family. I love to interact with new people and enjoy working with the equipment. Being in the radio program is something I plan to take with me throughout my life."

Lomatska said she is beyond glad that she was in radio because she had fun while learning.

"I hope this program continues to grow. I hope my fellow students will be a part of it to gain some knowledge and confidence in themselves," she said.