It's no secret that WWII Code Talkers are heroes 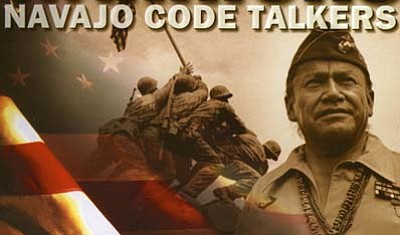 The U.S. lost another living link to a critical part of our history when services were held for a former World War II Navajo Code Talker, Billy Crosby, Dec. 27 in Chinle. Six former Code Talkers have died this year, and only a few dozen of the original 420 Code Talkers are still living.

Crosby and his fellow Navajos used their then-unwritten native language to transmit codes regarding every assault the Marines conducted in the Pacific. Thousands of their messages documented Japanese troop movements, battlefield tactics and other communications critical to the war's outcome.

These men were defined by far more than their military service and their ability to speak a secret language. They represented the best kind of Americans.

Take Crosby. At 85, he taught Head Start children about the Navajo language and culture long after he retired, and also volunteered as a foster grandparent. He was aptly laid to rest at the Chinle Community Center, near his hometown of Many Farms. "Mr. Crosby never stopped giving back to his community," Navajo President Ben Shelly told the AP. "He was a model for his people well beyond his service to his country and people."

Although many were discharged in the 1940s, the Code Talkers' part in WWII wasn't public knowledge until the military declassified their contributions in 1968.

The list of living Code Talkers, however, is becoming precariously short.

We salute the rarest of those who served.

(Editor's note: This editorial originally appeared in the Dec. 28 edition of The Daily Courier, a sister publication of the Navajo-Hopi Observer.)