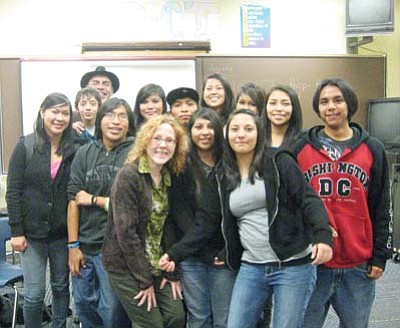 POLACCA, Ariz. - Not many hard core felons go from prison to fortune and fame, but thanks to poetry that is exactly the road that Jimmy Santiago Baca has taken.

Baca, who is Apache and Chicano, spent Dec. 8 at Hopi High speaking to Dawn Weber's English classes about the importance of poetry. His road to fame started with voracious reading while he was serving more than 20 years in prison.

It is these stories which captured the attention of the Hopi High students as he also told them that he is working on setting up a world website for young writers giving them a place they can publish their work.

Baca continues to conduct workshops for schools, colleges and universities including on reservations, barrios and ghettos as well as prisons.

Baca has published several books including his memoir, "A Place to Stand." This book chronicles his troubled youth and his transformation into writing.

He spoke to the Hopi High English students about his love for running and the need for everybody to find balance in their life.

"The culture of abundance can mess you up," he said about obtaining money too quickly.

Baca asked the students about what they like to do for fun and who their favorite authors are. He said poetry is what changed his life.

"If you could look inside my life for the last six months to see the awards and traveling, well it's all happened because of poetry," he said. "This little Chicano kid has this because of poetry. It has kept me alive."

Baca said when people grow up on the streets they become proud of their wounds. He has been shot a number of times before changing his life.

"My body taught me to be a warrior, but not in a good way. When my baby was born, I started shaking because I didn't know how to hug," he said.

Baca recounted how doors started to open for him because of his poetry.

"It has brought me an incredible life. It was like a bazaar science fiction. I wrote verse and doors unlocked," he said.

Baca spoke about a girlfriend he tried to impress with stolen cars, but at the time she was cheating with other men. He wasn't able to get her attention until he wrote her a poem from prison. She traveled to Phoenix from Chicago to see him.

Before going to jail when he would see this girl he would always be drunk or high. When he saw her visit him in prison, he thought: "Damn, she's ugly."

"Poems helped me define women differently. I started defining them by their intelligence, sweetness and compassion," he said.

Baca has been in jail or prisons for 21 years.

"Then to go make a living is almost impossible, but my poetry has allowed me to do this," he said.

Baca told the students that to be successful they need to have a connection to a higher power, somebody to nourish them and respect for their ancestors.

Weber said Baca's presentation was great and she just wished he could spend more time here.

According to a website, Baca continues to live in Santa Fe. N.M., where he was born and raised. His parents abandoned him when he was two. He lived with his grandmother for several years before he was placed in an orphanage. He lived on the streets where he started running with gangs and using drugs.

He served more than six years in prison including three years in isolation. He even spent some time in the same area as inmates on death row. This is where he taught himself to read and write--and compose poetry.

A fellow inmate convinced him to send it to send his Mother Earth magazine where his work was published and then-editor Denise Levertov also found a publisher for Baca's first book.

His first collection of poems was called " Immigrants in Our Own Land." In 1987, Baca wrote a semi-autobiographical epic in verse and received the American Book Award for poetry. In 1989, he was recognized with the Hispanic Heritage Award for literature.