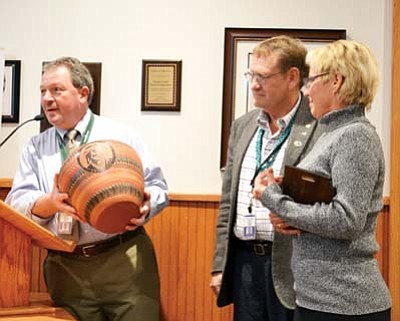 Submitted Photo<br> County Manager James Jayne presents a beautiful piece of Navajo artwork to Assistant County Manager Dusty Parsons and his wife Cynthia at the Navajo County Board of Supervisors meeting on Dec. 27.

"Dusty is a great friend," said Jayne. "But he is also an outstanding person to have on your team. He has been in public service for over 30 years, and we have been very lucky to have his wisdom, skill and integrity in Navajo County for the last 18 years. He will be greatly missed, but we know that he will continue to serve and take an active role in our community for many years to come."

Parsons began his service in Navajo County in 1993 as the Highway Superintendent of Public Works. In 2000, he was named the Deputy Director of Highways and served there until 2005 when he became the Navajo County Public Works Director. Parsons served admirably in that role until he was asked to be the Assistant County Manager on June 17, 2008, serving there until his retirement.

"I have known Dusty for many years in both a public and professional setting," said Board Chairman David Tenney. "He has been a hunting buddy, a good family friend and a professional colleague for a long time. I have seen him in action in our county offices and in the halls of Congress, and I am very grateful to him for the dedicated service and professionalism he has rendered for the citizens of Navajo County."

Parsons has developed an outstanding reputation over the years as a decisive decision maker, and a champion of saving the taxpayers money. Among his many roles in the County, he has been the Director of the Emergency Management Team, a member of the Northland Pioneer College Governing Board representing District IV and he has been actively involved in conservation issues.

"Dusty will be greatly missed by everyone here at Navajo County," said Sheriff KC Clark. "He has been a great ambassador for our citizens at the local and state level."