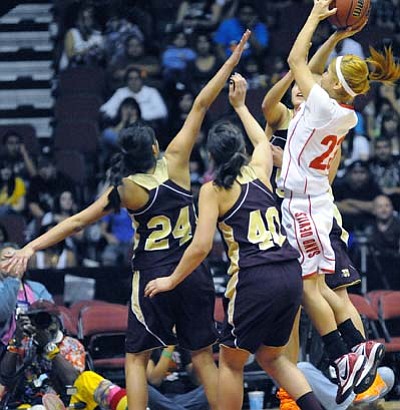 Todd Roth/NHO<br> A Lady Sand Devil takes a difficult shot in the championship game while surrounded by three Winslow Bulldogs trying to block her attempt.

GLENDALE, Ariz.-The Page Lady Sand Devils (30-3) win their first Girl's State Basketball title since 1999 over the Winslow Lady Bulldogs (24-6), during the girls' state championship game of the Division III 2012 Arizona Girls State Basketball Championships, the "February Frenzy," at the Jobing.com Arena in Glendale, Ariz. by a score of 46-38.

The Lady Bulldogs played the Page Lady Sand Devils for the championship on Saturday and lost 46-38. Page defeated Camp Verde 60-45 in a game that was close at the half before Page outscored the Lady Cowboys 24-10 in the third quarter.

The Page Lady Sand Devils defeated the Winslow Lady Bulldogs 46-38 on Saturday to capture the Division III Arizona State Championship. Page finished the season with an impressive 31-2 record. The Lady Bulldogs ended their season with a 24-6 record.

A huge fourth quarter in which they scored 22 points was the key to the Lady Sand Devils' victory. The game had been tied 7-7 after the first quarter. Winslow led 15-13 at the intermission and the teams were tied at 24-24 after three quarters. Page hit seven of 17 three point shots with half of them in the final period.

Malarie Williams led all scorers with 16 points for Page and was eh only player for either team in double figures. Boka Claw scored nine points for Page. Corey Nez and Mattea Begaii led Winslow with eight points each.

Turnovers hurt Winslow as they were cited for 23 such miscues. They were also charged with more fouls than Page and had a key player foul out early.

Winslow fans expressed discontent with the officiating; especially a key foul that appeared to be a jump ball situation and several other calls that appeared questionable. A shot well after the first half ending buzzer was originally signaled as good but reversed after the officials conferred and may have gotten help from the timer to correct the error.

"I am speechless, I am sooooo happy, and those girls deserve it. That's why, I am so happy, I wanted it all year this year, because those girls deserve it, those seniors worked hard a long time and they put up with a lot of stuff from me" said Justin Smith the Page Lady Sand Devils head coach, "It feels good, I don't know if I felt better."

The Winslow Lady Bulldogs got an overtime win over the Tuba City Lady Warriors on Friday in the semifinals of the Arizona Division III State Championship Tournament at Gilbert but lost to the Page Lady Sand Devils in the Championship Game on Saturday.

The Winslow Lady Bulldogs defeated the Tuba City Lady Warriors 48-47 in overtime on Friday to reach the Championship Game on Saturday in the Division III Arizona State Tournament. The win improved Winslow's record to 24-5 for the season and ended Tuba City's season with a 24-7 record.

Winslow led 13-10 after the first quarter but trailed 26-22 at the half and 35-34 after three quarters. The Lady Bulldogs rallied and had a three point lead with just seconds to go when Vernene Sheppard hit three free throws to send the game into overtime.

The game was not decided until the final buzzer when Tuba City star Jamie Roe grabbed a missed Winslow free throw with just six seconds on the clock and raced down the court where her short bank shot rolled over the rim with the buzzer sounding.

Jamie Roe was the game high scorer with 19 points to lead Tuba City. Vernene Sheppard was also in double figures for the Lady Warriors with 12 points.