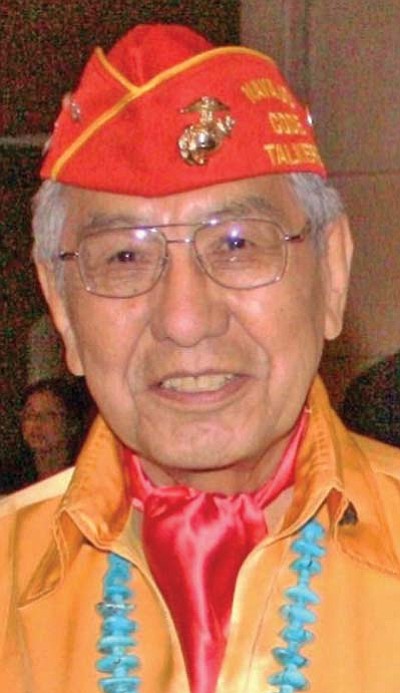 In accepting the position, MacDonald told his fellow comrades and their families, "I will do my best as your president. I am committed and dedicated to establishing the National Navajo Code Talkers Museum and Veterans Center. I need your help."

MacDonald, a World War II Veteran, served in the U.S. Marine Corps, 6th Marine Division from 1944-46 in the South Pacific and North China. Upon his discharge, with a rank of Corporal in October 1946, he headed home to Teecnospos, Ariz. He graduated from Bacone High School, earned a Social Science degree from Bacone Junior College, and received an electrical engineering degree from the University of Oklahoma.

He was employed as a project manager and a member of the elite Hughes Technical staff (MTS) for the Hughes Aircraft Company, manufacturing the Polaris Guidance System.

Most prominent is his unprecedented four terms as Chairman of the Navajo Nation, in 1971-83 and 1987-91. He also co-founded the Council of Energy Resource Tribes (CERT), National Tribal Chairman Association, American Indian National Bank and the Native American Prep School.

Among his many honors are: recipient of the Congressional Silver Medal, University of Oklahoma Engineering Hall of Fame, special commendation by President Richard M. Nixon, the Distinguished Service Award by the U.S. Marine Corps League, TIME magazine's 1974 one of 200 "Rising Leaders of America", and the Distinguished Service citation from the University of Oklahoma.

MacDonald was appointed by U.S. Presidents and state governors to serve on several national task forces and commissions. He holds honorary doctorate degrees from the University of Southern Utah in Cedar City, Utah and the College of Ganado in Ganado, Ariz.

Today, he lectures across the nation and lives on the Navajo Nation in Tuba City, Ariz. with his wife Wanda and has five children and seven grandchildren.