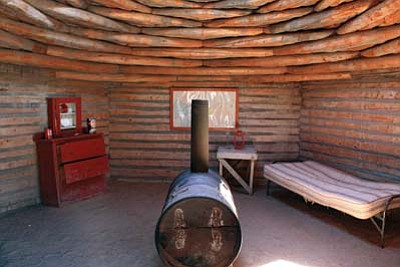 Photo/Rick Abasta<br> Navajo Nation chapters participated in training for the National Incident Management System in January, which was sponsored by the Division of Community Development, Public Health Emergency Preparedness Program and the Inter-Tribal Council of Arizona. However, the question remains: Is your hogan prepared in the event of an emergency?

NAVAJO NATION - Navajo Nation chapters in all five agencies recently participated in emergency preparedness training held in conjunction with Emergency Preparedness Week Jan. 23-27, as proclaimed by President Ben Shelly. The Division of Community Development (DCD) collaborated with the Public Health Emergency Preparedness Program (PHEP) and the Inter-Tribal Council of Arizona (ITCA) for the two days of training across the Navajo Nation.

"Chapters need to be prepared in the face of emergencies that may arise in the form of blizzards, forest fires, floods, or any other kind of disaster," said Arbin Mitchell, director of Community Development. He noted that DCD's Woven Integrated Navajo Data (WIND) System is instrumental in the event of an emergency, particularly the use of the satellite imagery of the Navajo Nation, which can be used to identify buildings and chapter assets.

The PHEP was formally known as the Bio-Terrorism Preparedness Program and was established in 2004 through an intergovernmental agreement between the Navajo Nation and the Arizona Department of Health. The program developed and implemented a reservation wide Public Health Emergency Preparedness and Response Plan in coordination with Indian Health Services, hospitals, clinics and Navajo Nation entities.

Priscilla Thomas, program and projects specialist for the PHEP said they provide public health emergency preparedness training and an organizational structure to the Navajo Nation. "Our program initiates response activities to ensure continuous awareness of the earliest possible warning of a public health disaster or outbreak," Thomas said. An active 24-hour, seven days a week emergency contact list is maintained by the program for emergency response, she said, adding that the program is responsible for oversight of the Incident Command Posts to address emergencies.

Introductory training to the National Incident Management System (NIMS) was provided to chapters on Jan. 25 and 26 in all five agencies on the components, concepts, principles and definition of preparedness. The IS-700.a training described preparedness as "A continuous cycle of planning, organizing, training, equipping, exercising, evaluating and taking corrective action in an effort to ensure effective coordination during incident response."

An emergency occurred in Dec. 2011, when communities within the Navajo Eastern Agency had to dig out from snowfall ranging from 10-inches to two-feet. The blizzard conditions were followed by muddy conditions from snowmelt, adding another dynamic to the emergency response. Tohajiilee, in the most eastern portion of the reservation in New Mexico, declared a state of emergency on Dec. 28 and coordinated with various entities to reach community members subsisting in the higher elevations. Distribution of supplies was coordinated and tribal officials assisted families with firewood and other basic necessities in the wake of the storm.

Thomas said, "(NIMS) also provides the foundation needed to ensure we can work together when our communities and the Nation needs us the most." The training provided on NIMS ensures chapters as the local government entity are prepared for any and all emergencies. The trainings provided by the PHEP focused on the implementation of an Incident Command System and the inventory of resources to expedite emergency response time.

Currently, the Navajo Nation is the only tribe throughout Indian Country to have a Strategic National Stockpile and Receiving, Staging and Storage Site (SNS/RSS), which is also a model for the Center for Disease Control. "We have a central location where all vaccine and medical supplies can be stored for immediate distribution to the identified point of distribution sites in chapter communities," Thomas said. "This is where trained chapter personnel would be very important."

The last major emergency for the Navajo Nation was Operation Snow Fall in 2010, when seven Incident Command Posts were established for the distribution of supplies - food, wood, coal - and equipment. She said the coordination went smoothly for the most part, although there were some speed bumps along the way. Regarding the current training with chapters Thomas said, "I'm hoping all participants will learn there is a way to respond to an emergency and that it is not difficult to get all the relevant paperwork in."

The single most important aspect of the job is communication, Thomas said, who also serves as the liaison for the Incident Command Structure. In Jan. 2012, the PHEP participated in a statewide drill executing an Emergency Operations Center (EOC) for Arizona tribes, health departments, emergency management departments and various other entities. "(The Navajo Nation) scored an 'A' or '100 percent.' At the state level, we are tops of all the tribes in Ariz., N.M. and Utah," Thomas said.

She encouraged chapters to plan and be prepared, especially for the winter season. Other considerations include the rainy season resulting in floods and muddy conditions. Forest fires are also another emergency that occur during the summer months. The creation of a Community Emergency Response Team (CERT) is crucial, to educate members and train them in basic disaster response skills.

"When that terrible event happened on 9-11, it showed the flaws of emergency response, lack of interoperability, lack of space in hospitals and no alternate sites for treating victims," Thomas said. "The list goes on." Through establishing communications with the Department of Public Safety and the EOC, a community member trained in NIMS or CERT can get entities involved, alleviate miscommunication, implement a public warning system and account for community members. NIMS training for chapters will continue again with the next level of education, beginning in March.