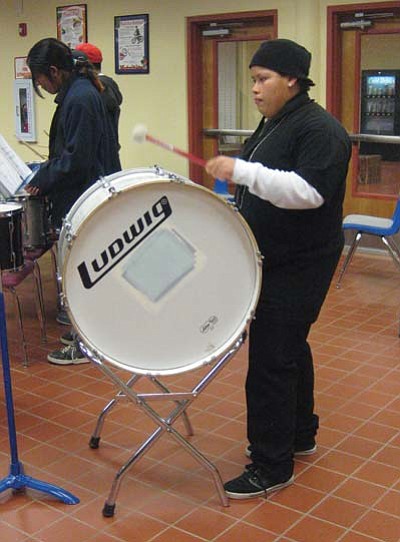 Stan Bindell/NHO<br> Jasmine Morgan concentrates on learning how to play the drum.

POLACCA, Ariz. - Since Thomas Irwin became the music teacher, Hopi High music, guitar and jazz has become known throughout Northern Arizona because of performances in Flagstaff and the Grand Canyon Music Festival.

But sometimes the beginning band, percussion unit and jazz band perform at home. The musical classes recently performed a concert in the Hopi High School cafeteria. The auditorium has been under renovation, but is almost ready for performances.

The jazz band performed Birdland, Born to be Wild, Ely's Coming, How High the Moon and Malaguena. The beginning band played Procession from Water Music, Banana Boat Song and Indigo Rock. The percussion band played Getting Down with DLM and Rock Cadences 1 and 2.

Irwin said the beginning band played well, the percussion started a little off but improved as they went along and the jazz band played clean and well.

He said the outstanding performers were Ezra Albert with beginning band, Kaeden Mooya and Jasmine Morgan in the percussion ensemble and Colin Sekenima and Haley Keith with the jazz band.

"The audience was very supportive. It's a small venue, but we had a positive reception," he said. "The kids were happy with it."

Irwin said they appreciate everybody's support and noted that the administration has been supportive.

He said he will be happier when the music groups will be able to perform in the auditorium.

Jasmine Morgan, who is in jazz band, percussion and beginning band said the concert was good, but it was long and hard. She said it was toughest on the beginning band because they have the least experience among the student musicians.

Morgan's favorite piece was Born to be Wild because it's fast and upbeat.

Morgan, a senior, is in three music classes and plays guitar, drums, marimba and tenor sax. Yet she does not plan to major in music in college. She's doing it just for fun, so she'll major in engineering at Utah Valley State University.

"I've been playing since the seventh grade and I just love music," she said.

Morgan was happy with the crowd's response.

"My mom said the concert was good because she was able to see different students learning music," she said.

Morgan also looks forward to performing in the auditorium.

"The sound will travel better," she said. "I'd like to see more students in advanced band because it's fun and they could learn music."

The guitar ensemble is participating in periodic poetry readings where Hopi High English students read their poetry and the guitar students perform solos.