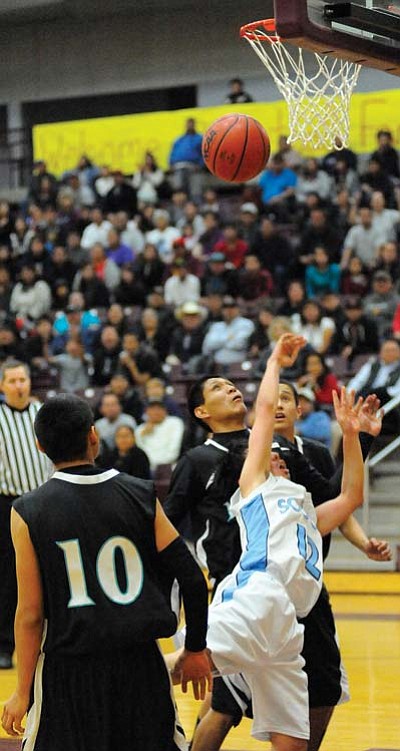 The Window Rock Scouts and the Snowflake Lobos won their Division III Sectional Tournament games on Wednesday in Winslow and advanced to the next round in Chinle on Friday.

The Window Rock Scouts defeated the Pinon Eagles 58-47 in the Division III Sectional basketball game played on Wednesday. The win improved Window Rock's record to 24-3 and let them advance to play Alchesay in Chinle on Friday. Alchesay advanced with a 55-52 win over Valley Sanders in Chinle on a three point shot at the buzzer.

Window Rock led 14-10 after the first quarter of play and by only a point 28-27 at the half. The Scouts stepped up their game in the third quarter and led 43-35 going into the final period.

Daryl James of Pinon was the high point scorer of the game with 16 points. He was the only Eagle in double figures. Jaydiamond Taliman led Window Rock with 13 points. Ian Bahe with 11 points and Kyler Ashley with10 points were also in double figures for the Scouts.

Snowflake started very strong and had a double digit 21-11 lead at the end of the first quarter. St. Johns cut the margin to single digits in the third and fourth quarter but never threatened to take the lead. The Snowflake advantage was 39-28 at the half and 55-42 after three quarters.

Chase Walton scored 17 points for Snowflake to lead all scorers. Reggie Peterson with 13 points and Dustin Baldwin with 11 points were also in double figures for the Lobos and Reggie Peterson scored nine for the victors.