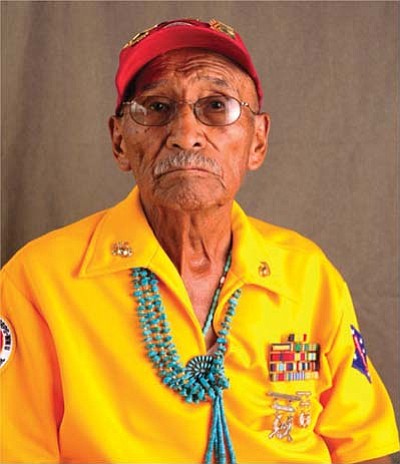 President Shelly ordered the Navajo Nation flag to be flown at half-staff Feb. 2-5, to honor Sgt. Begay for his service to his country in World War II.

"I am deeply saddened by the loss of Sgt. Begay. His efforts to defend this country and his people make me proud. My prayers, and the prayers of the First Lady, the Vice President and the Navajo Nation are with the family," said President Shelly.

Code Talker Begay enlisted in the U.S. Marine Corps in November 1942, when he was 17-years-old. From Fort Wingate, N.M., he boarded a bus for Camp Pendleton, Calif., where he would complete boot camp before transferring to Camp Elliot to train as a Navajo Code Talker.

After completing his service in the Marines in 1945, Begay received an honorable discharge. He then finished his schooling at Santa Fe Indian High School and worked as a guard at the Army Depot-Japanese Internment Camp in Leupp, Ariz. He even competed in the sport of boxing before going into the Navajo Forest Products Industry (NFPI). He retired from NFPI in 1985.

Code Talker Begay earned numerous commendations for his brave and honorable feats in the Pacific, including the Congressional Silver Medal in 2001.

Funeral services were scheduled for Saturday, Feb. 4, 2012 at Our Lady of the Blessed Sacrament in Fort Defiance, Ariz. Code Talker Begay was buried at the family cemetery in Red Lake, N.M.