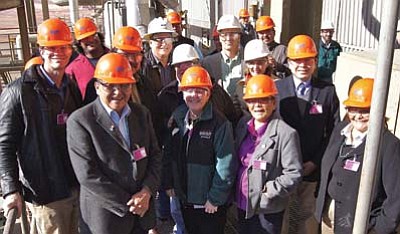 PAGE, Ariz. - President Shelly, along with other Navajo Nation officials, met with Gina McCarthy, Assistant Administrator for the Office of Air and Radiation, at Navajo Generating Station (NGS).

Specifically, President Shelly asked if the new proposed rule about regional haze would reflect some of the Navajo Nation's concerns about the economic importance of NGS to the Navajo economy; and he called for more coordination and communication in accordance with the government-to-government relationship with the U.S. EPA.

"We are going to do the best job we can to understand what you believe will be the consequence of this decision," McCarthy said.

The 2,250 megawatt Navajo Generating Station, which employs nearly 460 Navajo people, has been facing a proposed EPA rule that would mandate the nearly 40-year-old plant to install costly emission controls that principle operator Salt River Project said could force the plant to close. The technology is projected to cost $1.1 billion to install.

NGS and Kayenta Mine, which supplies coal to the power plant, employ nearly 1,000 Navajo people and contribute about $140 million annually to the Navajo economy in wages, royalties, lease payments and scholarships.

"The U.S. EPA has not done a sufficient job of engaging the Navajo Nation in government-to-government discussions about issues that Navajo finds significant and important. Dialogue with tribal nations are important as there is not a one-size-fits-all approach," President Shelly said.

McCarthy acknowledged that her office has not communicated with the Navajo Nation as well as they could've, but recommitted her office to hearing out Navajo Nation's issues with proposed rules.

"The reason I'm here is try to do my best to make sure that isn't the case as we move forward and that we do the best job we can to come to a balanced decision on this one and the ones to follow," McCarthy said.