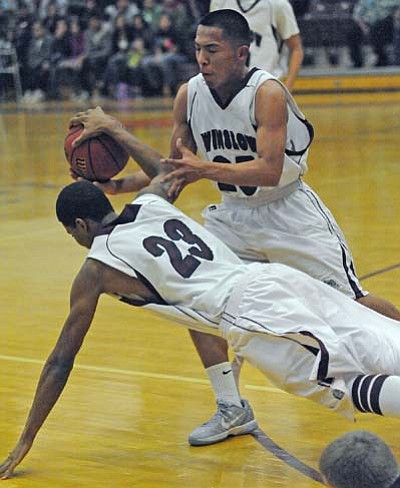 WINSLOW, Ariz. - The Winslow Lady Bulldogs got an important win over the Page Lady Sand Devils in Winslow on Thursday but the Bulldogs lost an important boys' game in the nightcap that could keep them out of the state playoffs.

The Lady Bulldogs defeated the Page Lady Sand Devils in a game played in Winslow on Thursday. The victory improved Winslow's record to an impressive 20-3 for the season. Page suffered only its second loss of the season and has a magnificent record of 22-2. These are two of the best girls' teams in the state and have split their two games against each other.

The teams were tied at 9-9 after a low scoring first quarter and Winslow led by a single point 20-19 at the half. The third period was the best of the contest for the Lady Bulldogs as they built a 33-24 nine point lead in that quarter. The final period was played on even terms as the Lady Bulldogs walked off with the victory.

The Lady Bulldogs were to play the Coconino Lady Panthers in Flagstaff on Friday and will complete the regular season on Friday, Feb. 3 at the Tuba City Lady Warriors.

In the boys' game the Page Sand Devils defeated the Winslow Bulldogs 49-46 in a potentially very important game. The loss left the Bulldogs with a record of 11-13 and may have jeopardized their chances for a berth in the state tournament. Rumors were that Page and Winslow were tied for the final berth in the AIA's power point system.

Winslow started with a poor first half in which they trailed 13-9 after the first quarter and 22-13 at the half. The margin was still a substantial 41-29 after three quarters of play. Winslow finally cut into the lead in the final period but it was too little, too late.

Marcus Begay led Page and all scorers with 17 points for the Sand Devils. Chavis Charley was also in double figures for Page with 12 points. Tyler Williams was the only Bulldog in double figures with 15 points.

The Bulldogs were to play the Coconino Panthers at Flagstaff on Friday and will complete the regular season on Friday, Feb. 3 at Tuba City against the Tuba City Warriors. Winslow needs wins in both of those games and still may not qualify for the state tournament under the power point system.