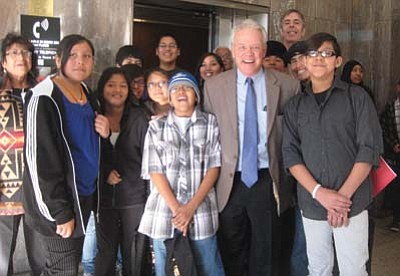 The purpose of this day was for tribes to tell the state legislators what they want from the state, and how the two entities can work cooperatively.

The students had a chance to visit the state capitol and meet with Arizona Rep. Tom Chabin, a Flagstaff Democrat who lived on the Hopi Reservation for much of his adult life. They also watched the ceremony, which included speeches by Navajo Nation President Ben Shelly, Gila River Gov. Gregory Mendoza and Fort Mojave Vice Chairman Shan Lewis.

Chabin explained to the students that legislative lines are changed every 10 years through the redistricting process, and after this year's redistricting he will no longer be in the district that includes Hopi. He asked the students about which village and clan they came from, adding that they should be proud of who they are.

He praised the Obama administration for funding federal schools, such as Hopi Jr/Sr High School. He said the public schools haven't been as lucky, as the state legislature has cut funding for public schools.

Senate President Pierce said he looks forward to building relationships with all communities in Arizona and feels they can learn a lot from the tribes.

Arizona State Sen. Jack Jackson Jr., who also represents Hopi, said each year this day of sharing is good, but he would like to make it more important by elevating the Arizona Commission on Indian Affairs to the cabinet level.

Sen. Jackson noted that New Mexico has made its Indian commission part of the state cabinet.

Fort Mohave Vice Chairman Shan Lewis talked about tribal water rights pertaining to the Colorado River. He said tribes will continue to play a major role in obtaining and distributing water, so they need to work with cities, regions and the state on water rights negotiations.

Gila River Gov. Mendoza spoke about his reservation as a vibrant economic center.

"We want to create jobs in Arizona that border our community," said Mendoza. "We will work with our neighbors as kind and dependable friends."

Gov. Mendoza also spoke out opposing expansion of casinos off the reservations or at racetracks.

"If you approve racetrack casinos it will be in everybody's neighborhood in Arizona. That's not what Arizonans want," said Mendoza.

Navajo Nation President Shelly said the tribes and state legislature need to have more meaningful collaboration. He told the legislators that he receives heart breaking letters from youngsters talking about suffering from poverty, hunger, drug and alcohol abuse and bullying.

"They don't need to go through this," said Shelly.

President Shelly said solutions can be reached through collaboration and talking.

"We want to create more jobs and the state can help us," he said.

needs to stay open. They may close it because the federal government has called for better pollution controls, which cost millions, that they may not be able to afford. He said the jobs at the power plant are important for feeding families and raising taxes for the state.

President Shelly said he would like to see Navajo open a casino at Twin Arrows.

"As well as talking with the Hopi chairman about his many plans to help the next generation on how they will be able to qualify for his position. Also meeting Miss Indian Arizona," said Weston.

Weston, who is also in Upward Bound, said the day could be improved by having more people talk about their tribal needs as well as going a little more in depth on their situations.

"He joked about how in the old days the elders went first rather than the younger guys" said Weston. "He also talked about the next generation as well as how they need to address drugs, abuse and starvation because even fifth and sixth graders wrote to him."

Weston said she would not want to be in government because it's too stressful. She said the most important issue was Shelly's speech about the problems facing young people.

She said the Senate building was amazing because that is where the elected officials hang out. She added that the building looked small from the outside, but was big on the inside.

"Being there helped us understand more about different tribes as well as experiencing what it's like to be in an actual session," said Weston.

Trevor Jackson, a freshman at Hopi High, said he learned that every Senator has their own district and different problems to fight. He noted that in order to get legislation passed they need agreement from a majority of the legislature and approval by the governor.

He said the best part was when the tribal leaders argued for their districts with pride and motivation. He said President Shelly gave the best speech and he would like to be more involved with government.

Jackson said the most important issues were the proposed casino on Navajo and the pollution that goes into water.

Alex Quiyo, a freshman at Hopi High said he learned that casinos are destructive and that some want to improve the casinos and others don't. He said the best speech was the one opposing casinos.

"The best part for me was when the Tohono 'odham color guard presented the colors," said Quiyo.

Quiyo said the speakers need to learn not so to say "umm" or "uhh" so much.

He said he would not go into government because "the nation is already messed up." He added that the most important issue was that state representatives only get paid $24,000 per year. He said attending this event was important because there are a lot of problems in tribal communities and legislative day gives them a chance to address their problems.

Janissa Laheleon, a seventh grader at Hopi Junior High, said she learned how the state government could help Native Americans with their problems. She said the best part was when they told the students about the resolutions they are working on.

Laheleon said the day could have been improved by talking about all tribes, rather than just some. She said the best speech addressed the need for building homes on the reservations and giving support to children who don't have money to attend school.

She is interested in going into government because she wants to help people.

"I also want to give ideas on how we can help all our people, but not just Native Americans, but all people in the state of Arizona," said Laheleon.

Laheleon said she liked Rep. Chabin's idea of lowering the tuition to state colleges, so more students could afford to attend.

"I think that was the most important issue because people aren't getting their education because they don't have enough money. Some dropout because they already owe too much to the college," said Laheleon.

"They have good ideas. It's also important because they are trying to let us have a better life," said Laheleon.

Aleesha Begay, a seventh grader at Hopi Junior High, said she learned how the state government could help the tribes. She said the day would have been improved if there was more seating.

Begay said all the speeches were good because the tribal leaders addressed problems that their people are having. She wants to become more involved with government so she can help people with problems in their home or community.

"Rep. Chabin was very nice to us," said Begay. "We got to talk to him and take pictures with him."

Begay said the most important issue is how students are having problems in college. She said tribal legislative day was important because the students learned about tribal problems and how to solve them.

Nicholai Bolus, a seventh grader at Hopi Junior High, said she learned how each district has to address their own problems. She said the best part was attending the session.

Bolus said the event would have been improved if all of the state representatives attended. He said he wants to be more involved in government because he wants to help every district with their decisions.