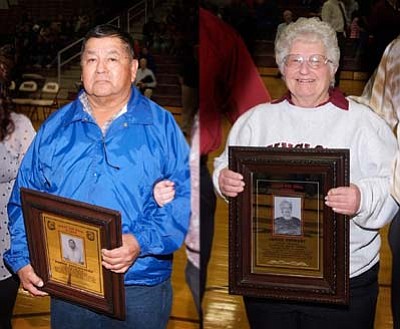 WINSLOW, Ariz. - On Jan. 26 during the basketball games with Page, two Winslow High School employees were honored for their service. Ronnie Polehptewa and Janice Stewart each have worked for the Winslow School District for 50 years each.

Poleheptewa was born in Winslow and attended Winslow schools most of his life. He moved from Winslow his sophomore year of high school completing his education at Phoenix Indian School. Luckily for the Bulldogs, Poleheptewa returned home. In 1962 he was hired by Winslow Unified School District as a maintenance man and so began a long career with the district eventually becoming the District Maintenance Supervisor. The duty of driving a bus was a portion of Poleheptewa's duties. In addition to driving a daily route where he won many fans among the students, he has transported Bulldogs all over the state of Arizona and has driven many out-of-state trips for tournaments. Poleheptewa is one of the most requested drivers by coaches and players - something to do with his great Bulldog spirit no doubt. Poleheptewa's four children are also Bulldogs.

Stewart's transformation into a number one Bulldog supporter started in 1962 when she was hired by the district to teach physical education and health at Winslow High School. That initial assignment led to a long, enduring career teaching in every grade level, elementary to high school, and a life-long career as a Bulldog fan. Stewart's love of athletics and her love of the Bulldogs has kept her busy. She coached track for 15 years and volleyball for 12 years. She has officiated volleyball for 22 years, still runs the clock, works track meets, chaperones school trips, and is the director of the Junior High basketball tournament and the hospitality room for that tournament. Stewart and her late husband, Olin, raised three children - all Bulldogs, of course.