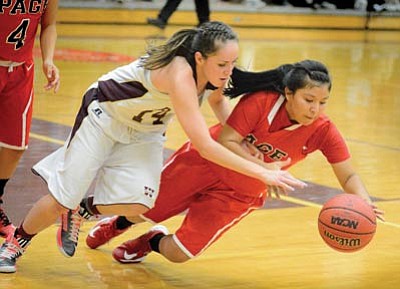 The Winslow Lady Bulldogs defeated the defending state champion Page Lady Sand Devils in a game that was surprisingly one sided. The win improved Winslow's record to 6-2 for the season and dropped Page to 9-5 for the season.

Winslow played tough defense and only allowed Page to score in double figures in one quarter. The Lady Bulldogs led 14-8 after the first period and 22-14 at the half. The margin was a commanding 35-18 after three quarters of play.

In the boys game, the Winslow Bulldogs defeated the Page Sand Devils 52-44 in a game played in Winslow Dec. 18. The win improved Winslow's record to 9-4 for the season.

The Bulldogs got off to a good start with a 14-10 lead after the first quarter but trailed 26-20 at the half. The Sand Devils remained in front 37-34 after three quarters of play. The Bulldogs put together a huge fourth quarter outscoring Page 18-7 to secure the victory.

Michael Redban led all scorers with 15 points for Page. Michael Goldtooth and Keenan Keams each scored 13 points for the Bulldogs.