Navajo Nation uranium clean up complicated by number of contaminated sites, history of problem
U.S. Environmental Protection Agency emergency clean up of two uranium mine sites in Cove, Ariz. a stopgap measure, possibly 2,000 uranium mine sites on Navajo Reservation in need of clean up 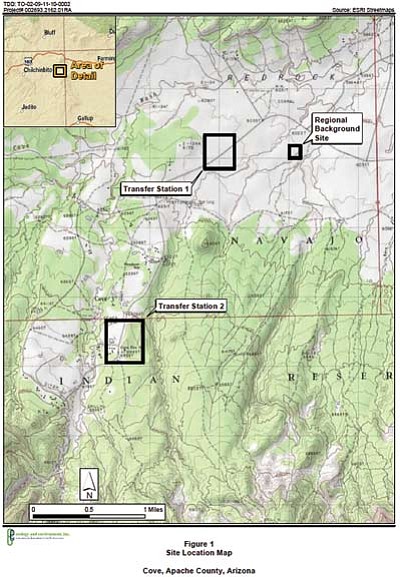 For seven weeks this fall, workers and scientists labored from 7:30 a.m. to 5 p.m., six days a week, digging up and hauling off thousands of cubic yards of uranium-tainted soil in Cove, Ariz., and sealing what remained.

The $1.5 million project by the U.S. Environmental Protection Agency (EPA) was an emergency measure to clean up two former uranium transfer stations because of their proximity to a day school, a house - which sat on top of one station - and a highway on the Navajo Nation.

The goal was to remove the immediate threat of uranium contamination, stabilize the soil and keep uranium from becoming windborne.

It's a stopgap measure on two tainted sites among at least 500 - possibly more than 2,000 - that pose a threat to people on the Navajo reservation that spans parts of Utah, New Mexico and Northern Arizona.

More than six decades after the first mines opened on Navajo lands, it is still unclear how many sites need to be cleaned up, how many people may be suffering from the effects of uranium exposure and what can be done to contain all the hazardous material in these communities - if that's even possible.

What everyone can agree on is that overcoming the legacy of uranium mining will take a long, long time.

"They say it's a widow community," Eugene Esplain said of Cove, where this fall's cleanup took place. "So many men have died from the impacts of uranium mining."

Esplain, who works for the Navajo Nation Environmental Protection Agency, said he drank from a uranium-contaminated well when he was a student at the Cove Day School, which is near Transfer Station 1.

"They shut it (the well) down, but that was after I left the school," he said.

Families that lived close to the uranium mines and the secondary sites where uranium was kept or processed - like the Cove transfer stations - breathed in radioactive dust in the air and ingested it in tainted food and water. Some Navajo used uranium-tainted material to build houses, although many of those structures have since been torn down, according to the U.S. EPA.

The contaminated dirt at the transfer sites is not easily discernable without the use of detection tools, said Maggie Waldon, EPA on-scene coordinator for the Cove cleanup.

"You wouldn't know because it did look like dirt. It didn't look any different than the dirt in the surrounding areas," Waldon said.

When uranium decays, it releases radon, an odorless gas that trails only tobacco as a cause of lung cancer in the United States. The EPA estimates that radon causes 21,000 lung cancer deaths a year.

Esplain said the dangers of radiation exposure depend on a few factors, such as a person's proximity to the contamination, the length of time someone spends close to it and the strength of the contamination source.

Uranium has always been present in Navajo country, but it wasn't until the 1940s that it was pulled out of the ground in industrial quantities.

Mining companies provided jobs to many Navajo men who took millions of tons of uranium ore from the earth during those years.

In the 1950s and 1960s, mining companies used Transfer Stations 1 and 2 in Cove to stockpile uranium ore that workers extracted from the mines in the nearby Lukachukai Mountains. The uranium ore piled on those sites was then trucked to a mill some 40 miles away for processing.

Navajo miners carried the dust home with them on their clothes and bodies, unwittingly contaminating their homes and, in some cases, exposing their wives and children.

The U.S. government was the main consumer of uranium during the mines' heyday on the Navajo Nation, when the U.S. used it in nuclear weapons and for other military purposes.

Uranium demand dropped off for a few decades but has picked up in the last few years with the rise of nuclear power. Still, most of the uranium used in the U.S. for energy comes from other countries.

"Currently, the U.S. imports more than 90 percent of the uranium used to produce nuclear power in this country," Carol Raulston, a spokeswoman for the National Mining Association, wrote in an email.

Mining activity at the Cove sites ended around 1968. But it was not until the 1990s and early 2000s that both Navajo and U.S. environmental agencies officially began to report that human health and environmental dangers might be emanating from the transfer stations, according to an EPA report on the sites.

EPA Region 9, which has jurisdiction over the Pacific Southwest region that includes 148 tribal nations, found "elevated radiation levels" at the two Cove transfer stations during aerial surveys of the Lukachukai Mountains.

The Navajo Nation EPA, which did its own assessments and conducted removal of some contamination from Transfer Station 1 in the early 2000s, then teamed with the U.S. EPA for help with further cleanup.

Tufts University Professor Doug Brugge first heard of the contaminated sites in 1995, when he was in Cove with some Navajo colleagues who were collecting oral histories from men who had worked in the uranium mines. One of Brugge's partners at the time pointed out a former mining transfer station.

"It's interesting that there were people in the community 17 years ago that knew about it and knew that it was a problem," he said.

Brugge, currently a professor of public health and community medicine at Tufts, said it is reasonable to think that if a community is exposed to uranium, there might be some health effects for neighbors.

It is difficult to say exactly how many of the health problems experienced by people living near mines and other contaminated sites is directly related to uranium exposure, Brugge said.

What is known is that uranium contains toxic material and poses a health risk, one that residents in places such as Phoenix or New York City would not tolerate for very long, he said. If people in those cities "found there was radioactive material in their backyard ... there would be a very aggressive response," Brugge said.

The recent cleanup of the Cove transfer stations was "straightforward," according to Rusty Harris-Bishop, a spokesman for EPA Region 9 in San Francisco.

Under the project, the EPA scanned the area with tools, dug for samples, tested them and began removing contaminated dirt. EPA crews used construction equipment to take contaminated soil from both sites and place them on low mounds on Transfer Station 2, which was an open field.

Workers covered those mounds with polymeric soil sealant, a liquid chemical that is commonly used for dust control, to keep the contaminated dirt from wind and rain erosion, Harris-Bishop said.

During the cleanup, workers constantly hosed down the dirt to keep down contaminated dust, Waldon said. The EPA also set up air monitors to make sure that radiation levels didn't endanger students at the neighborhood school, she said.

In the end, just under 12,000 cubic yards of material were removed, according to Waldon.

Though the cleanup is technically complete, the EPA said it found some contamination that was not detected during the original pre-removal assessment.

"We will likely return in the spring to conduct an assessment of the new areas," Harris-Bishop said in an email.

More to be done

And those actions are only a temporary solution: The Navajo Nation still has to come up with a permanent way to contain the material, according to Esplain and the U.S. EPA.

The transfer stations are small examples of the kind of work that needs to be done hundreds, if not thousands, of times on the Navajo Nation.

Esplain said the Navajo EPA tries to educate people on the dangers of uranium contamination and how to avoid coming into contact with it, but some exposure is unavoidable.

Meanwhile, residents there continue to live alongside the uranium, a hazard that cannot be smelled or tasted. They may drink from tainted wells and their animals might graze on contaminated fields.

When the wind blows it carries uranium dust into the air and people bring it into their lungs simply by breathing. But for now it is part of living on the reservation for some residents.

"It's inside of us and it won't come out," Esplain said.