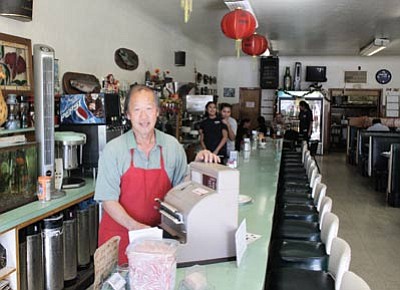 Fred Wong and his employees Raquel Nez and Paige Sandoval wait for the lunch crowd at the Grand Canyon Café, located on Route 66 in downtown Flagstaff. David Yankus/WGCN

The Grand Canyon Café has been a permanent fixture on Historic Route 66 in downtown Flagstaff for 70 years this month and continues to be a favorite restaurant to many Native Americans and other area locals.

The Grand Canyon Café first opened its doors in December of 1942. Four brothers from Durango, Colo. bought the restaurant in 1945 and managed it for 35 years. When the last brother retired in 1980, his son Fred Wong took over.

Wong said it was a different time when his father ran the business. Route 66 was much busier before Interstate-40 bypassed downtown Flagstaff. Restaurants were fewer and a T-bone steak cost just $2.25 and a hamburger cost 25 cents.

"But we're still here," said Wong, who began working at the Grand Canyon Café for his dad when he was just a youngster still in elementary school.

"I've seen generation after generation of Native American people from the Rez come in and say, 'my grandfather used to bring me in here when I was a little kid.' Now they're coming in here bringing their kids," Wong said.

Wong said the key to the longevity of the restaurant is keeping prices reasonable, never turning a customer away and always using fresh ingredients.

"We never use any frozen foods, always fresh, everything we use is made from scratch," said Wong. "No frozen potatoes or anything like that. Mashed potatoes, French fries, home fries for breakfast, they're all fresh and made daily. And it's been like that for 70 years."

Some of Wong's ingredients come from his farm in Camp Verde, which he also uses when he partakes in local farmers markets. He also expressed the importance of using fresh vegetables to really make a good sandwich.

Wong estimates about 70 percent of his customer base is Native American.

"They like a good, thick steak," Wong said. "They've been coming here for years. The pork chops and fried chicken are also some of my best sellers."

The number one best seller though, according to Wong, is his chicken fried steak. He said it's an old recipe his dad handed down to him, one that receives positive comments from customers almost daily. Wong said one regular even told him that he's never tasted a chicken fried steak like the Grand Canyon Café's anywhere else in the country.

The Wongs have three children, two boys and a girl. All three live in the Phoenix area and apparently have no interest in running the restaurant after their father retires.

"None of my kids want to take over, so it's probably down to the last generation," said Wong. "They say it's too much work, they'd rather have a Monday through Friday eight hour-a-day job. And I understand, sometimes we put in 14- or 15-hour days, six days a week."

After 70 years, the staying power of the Grand Canyon Café is evident. The restaurant has appeared in Arizona Highways magazine four times. Film crews have shot the interior of the Café for two movies.

The Grand Canyon Café offers what Wong calls the half-price special. Customers that order two steaks can get one at half-price.

"I've been here long enough though, a couple more years until I get full retirement," the 64-year-old Wong said. "I do hope that if somebody takes this over that they keep it pretty much like it is because for generations people have been coming here, off the reservation, locals, travelers, everyone."

Even though all their children live in the Phoenix area now, the Wongs plan to stay in Flagstaff after they retire. This is their home.