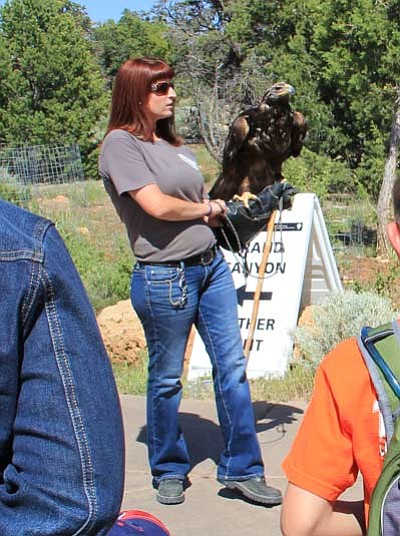 An employee with the Arizona Game and Fish Department of Wildlife Education Adobe Mountain<br /><br /><!-- 1upcrlf2 -->Wildlife Center shows a golden eagle to the public at Celebrate Wildlife Day May 19 at the Grand Canyon Visitor Center. NPS photo/Erin Whittaker

According to the plea agreement filed in U.S. District Court in Phoenix Dec.12, in January 2008, Patrick Scott, 46, used the Internet to illegally offer to sell a golden eagle fan for $950. An undercover law enforcement officer exchanged emails with Scott and ultimately agreed on a purchase price of $900. In February 2008, a second undercover law enforcement officer went to Scott's house and bought the golden eagle fan by making an initial payment of $550 and later deposited the remainder directly into Scott's bank account in two installments.

Also according to the plea agreement, between July 2007 and February 2009, Scott sold, purchased and/or offered to sell other migratory bird parts, from species including bald eagle, red-tailed hawk, golden eagle, crested caracara, anhinga and rough-legged hawk.

Federal laws and regulations protectGolden eagles and other migratory birds. Under the Migratory Bird Treaty Act, it is unlawful to possess, offer to sell, sell, offer to purchase or purchase any migratory bird or migratory bird part, or any product that consists, or is composed in whole or part, of any such bird or bird part.

Gloria Tom, director of the Navajo Nation Department of Fish and Wildlife (NNDFW) said NNDFW is committed to protecting raptors, including golden eagles.

"These birds are not only biologically important but are also culturally significant to the Navajo people," said Tom. "Commercializing these birds and their parts is illegal and is detrimental to our eagle populations on the Navajo Nation. The department is committed to fostering our partnership with the U.S. Fish and Wildlife Service to deter wildlife crimes on the Navajo Nation."

Ignacia S. Moreno, assistant attorney general of the Justice Department's Environment and Natural Resources Division, said the Department of Justice will not tolerate the commercial exploitation of federally protected birds, which are important not only as protected species but also as sacred elements of the religious and cultural traditions of many Native Americans.

"This is why the department recently published a policy to clarify that while the possession and use of migratory bird feathers and other bird parts is permissible for religious or cultural purposes by members of federally recognized tribes, it remains illegal to buy, sell, or trade in them for compensation," he said.

The maximum penalties for the unlawful sale of migratory birds include two years of incarceration and a fine of $250,000. U.S. District Court Magistrate Judge Steven P. Logan set Scott's sentencing for Feb. 26, 2013.

The U.S. Fish and Wildlife Service's Office of Law Enforcement conducted the investigation in coordination with the Navajo Nation Department of Fish and Wildlife. The Environmental Crimes Section of the Justice Department's Environment and Natural Resources Division and the U.S. Attorney's Office for the District of Arizona prosecuted the case.