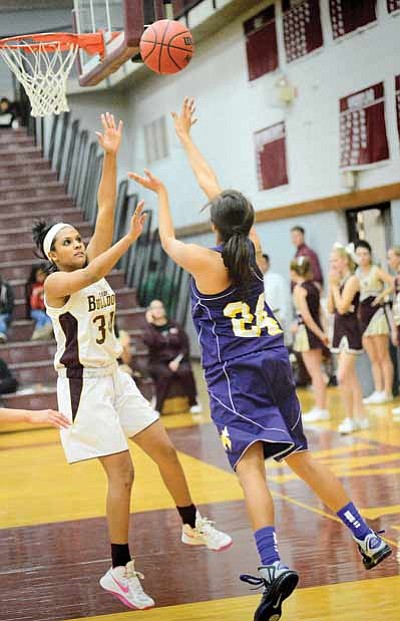 The Winslow Lady Bulldogs had no trouble sailing by the Blue Ridge Lady Yellowjackets in Winslow on Dec. 11 but the Winslow Bulldogs fell to the Yellowjackets in the boys' game in overtime. The girls' game was never close but the boys' contest was tightly played and ended tied at the end of regulation play.

The Winslow Lady Bulldogs easily got past the Blue Ridge Lady Yellowjackets 67-22. The victory improved Winslow's record to 5-2 for the young season. The Lady Bulldogs took on the Page Lady Sand Devils, defending state champions, yesterday. The team will host the Winslow Winter Classic Tournament Thursday through Saturday, which will complete

the 2012 portion of their schedule.

The Lady Yellowjackets were no match for the Lady Bulldogs as Winslow sped to a 20-0 lead by the end of the first quarter. The margin was a whopping 46-5 at the half and 59-14 after three quarters of play.

The boys' contest that followed was close after every period and needed an overtime period to decide a winner.

The Blue Ridge Yellowjackets nipped the Winslow Bulldogs 62-56 in overtime in a game played at Winslow Dec. 11. The loss dropped Winslow's record to 8-4 for the season.

The game was extremely close throughout and was tied 11-11 after the first period. The Bulldogs led 25-23 at the half and 40-39 after three quarters. The teams were tied at 47-47 at the end of regulation. The Yellowjackets hit eight of 10 free throws in overtime to win the game. Winslow made all four of its charities in overtime but was outscored 15-9.

The Bulldogs play the Williams Vikings at Williams on Thursday. Winslow will participate in the Tournament of Champions at Chinle on Dec. 27, 28 and 29 to complete the 2012 portion of their schedule.