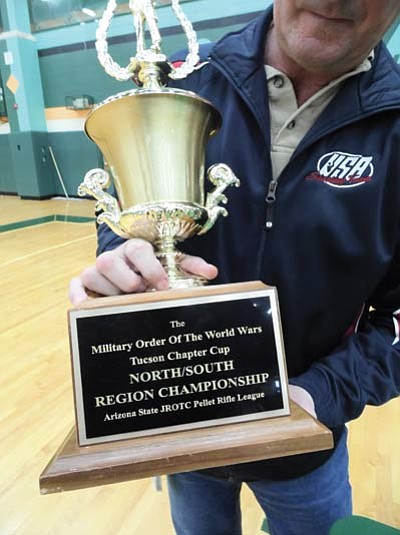 This win is one in a long line of wins in the past 10 years for the state and nationally recognized MCJROTC program at Tuba City High School in both drill team and shooting competitions.

MCJROTC teacher and leader, Gunnery Sergeant Tim Shaner, was ecstatic about the win this year because his team did not place as high in the past couple of years and now are back on a winning track.

"The North-South Region team traveling trophy was gone from our Tuba City High lobby showcase for a couple of years and to have it back with that name plaque that says 'Tuba City High,' sure feels good," Shaner said.

Shaner, who has been with Tuba City District for quite some time, credits his student shooters with a steady diet of no-sugar and no sodas, exercise, running, getting enough sleep and studying hard to be the best academic performers they can be as well as sharp shooters who practice, practice, practice.

"If you see these young winning students, please congratulate them, they did so well," Shaner said. "I'm so proud of each of them, for their discipline, for their teamwork, for their pride in coming from a competitive and supportive school environment like Tuba City."

The next state championship high school shooting competition will be at Ben Avery Range in Phoenix in January, 2013. Shaner is confident that his Tuba City High school team will do well.

"They are showing such serious commitment and discipline to their shooting craft, that I am certain they will do very well in our next round of competition. I have faith that their skill and practice sessions will yield a high winning score for our school," said Shaner.