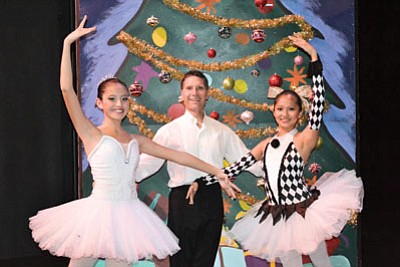 Neida Rodriguez and Isabella Shey-Robbins danced in two performances of The Nutcracker at Ardrey Memorial Auditorium at NAU Nov. 30 and Dec. 1.

Rodriguez, a ninth-grader at Northland Preparatory Academy in Flagstaff, played a doll in the party scene and a snowflake in the snow scene.

"I thought I did well, although honestly I somewhat messed up slightly the first night two times, but the second night only once," said Rodriguez. "I felt like I did really well overall, I improved from the first night in just one day too."

Shey-Robbins, a senior at Tuba City High School, played the Snow Queen for the first time in her dancing career. In previous Nutcracker performances she played a doll.

"I think it went pretty well. It was hard though because it was my first time dancing with a partner," said Shey-Robbins. "At the beginning I wasn't really scared of the lifts and the turns, but I was kind of scared that he would drop me. But I think after I realized he could lift me, it was fine. I would say it was definitely a good performance all around."

Andrew Needhammer, NAU Music and Dance Academy's dance program coordinator, has taught ballet in Flagstaff for nine years. He has taught Rodriguez for the past eight years and Shey-Robbins for the past six years.

"They both danced their parts in the Nutcracker very well. Isabella was the Snow Queen because of her elegant style, and Neida did her parts because of her strong technique and beautiful balletic lines," said Needhammer. "They are both wonderful students and performers and I enjoy working with both of them."

The 15-year-old Rodriguez began dancing ballet when she was only four years old. She performed in the Nevada Ballet in Las Vegas when she was 12 years old and with the American Ballet Theatre in Alabama at age 13. Earlier this year, she danced in intensive programs such as the Washington Ballet, the Arizona Ballet and the Colorado Ballet.

But despite all her experience, Rodriguez still isn't sure what the future has in store for her.

"I was debating whether to quit dance either this semester or next semester. I wasn't having fun anymore, it was becoming more of a chore," Rodriguez said. "I also do cross country in the fall, and with homework and ballet, I didn't have much free time or time for myself."

"Neida has several more years with the NAU Dance Academy and I think she will be able to have a career as a professional dancer if she continues to work hard and improve," Needhammer said. "Isabella is graduating but will hopefully continue her dancing in college."

Both girls said they learn a tremendous amount from Needhammer and appreciate everything he has done for them.

Shey-Robbins began ballet in Tuba City when she was nine years old. At the time, a ballet teacher lived and worked in the city. Two years later that teacher moved away, but suggested Shey-Robbins find a place to dance in Flagstaff.

"I think I took to the jumps pretty well, after a while it seemed once I knew I could do it, I could do it more often. And I just kept improving in that," Shey-Robbins said. "I think the harder parts are the actual technique of pointing your foot and keeping your leg straight."

"I know maybe I couldn't go professionally dance ballet, but I don't want to just give it up after high school," said Shey-Robbins, adding that she really hopes to become a stage actress. "No matter what I do in the future I think it will have something to do with the stage, and I know ballet has really helped me out a lot. It's the best stress reliever, and I'm really proud to be a dancer because I know not very many people can do it."

Shey-Robbins added that driving 72 miles back and forth between Tuba City and Flagstaff to class is not easy, but she loves being able to represent her town, her family and her people.

Needhammer danced at the National Ballet of Canada in Toronto, at the American Ballet Theatre II in New York and at the Arizona Ballet in Phoenix before coming to NAU to coordinate and direct the school's Music and Dance Program.