Hopi High students get a taste for broadcast journalism 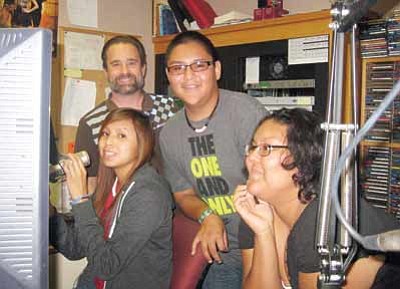 Hopi High journalism students Randi Lomayestewa and Jennifer Lomayaktewa had a chance to act as anchorwomen during a mock broadcast. The duo spent some time on air after watching NAU broadcast students tape a news segment for their show. The two high school students were at a disadvantage because they didn't have any time to read their scripts before going on.

"It was fun and I learned a lot about broadcasting," Lomayestewa said. "It was fun and scary. Me and Jenn were better when we knew we weren't being recorded."

The Hopi High students learned about the NAU TV, radio and journalism departments and toured the NAU campus including the Olympic size swimming pool and state of the art fitness center.

KMGN/KAFF radio personality Charlie Hicks gave the Hopi High students a tour of the radio station that day as well.

Lomayestewa, editor of the Bruin Times, is considering majoring in journalism and will give NAU extra consideration after seeing their facilities.

Detroit James, a radio broadcast student at Hopi High, said the visit to NAU was fantastic. He had a chance to shadow an NAU student in the "Brain Room" - the main video room where broadcast students work several television screens at one time.

"I like the production room," he said. "I want to go back so I can make my own newscast."

James, a sophomore, said the taping of the NAU students showed that the college students - who were also doing it for the first time - need to learn to relax and not be too serious."

While James was in the production room, he kept his eye on how Lomayaktewa was talking.

"The TV production was the best part," he said.

After the visit, Lomayaktewa said she is considering attending NAU to study pre-law or pre-med, but she may minor in broadcasting.

Lacey Tewanema, a junior, said she had a good trip because she learned more about NAU, especially after visiting the new Native American Center. She said watching NAU students tape a segment for its newscast was a cool, unique experience.

"They were nervous, but they did better on the second set of the taping," she said.

During the mock Hopi High newscast, Tewanema worked on the teleprompter.

"It was cool because I got to control what people were saying and how fast or slow they would go," she said.

Tewanema, a broadcast radio student who has won state awards for journalism from the Arizona Interscholastic Press Association, already plans to major in journalism. She said NAU is one of her top choices because it's close to home.

"Then I could get more help from my family," she said.

Tewanema is also considering Kansas State University because of its stellar journalism program.