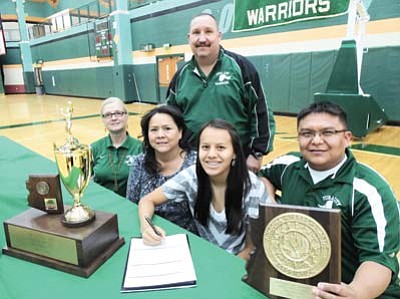 Kristen Becenti, a senior at Tuba City High School (TCHS), from the "One Who Walks Around" clan signed a formal letter of intent to play two years of volleyball at Glendale Community College. Her mother Veronica, acting TCHS principal Karin Jones, her coach Harlan Barlow and TCHS Athletic Director Jamie Roe looked on as she signed the award letter.

Becenti, the daughter of Veronica and Roland Becenti, is a genuine product of Tuba City. She began playing volleyball in seventh grade when her dad encouraged her, telling her that volleyball could be a way to help her win a sports scholarship to get her to college.

Becenti believed her parents, both college graduates, when they told her that college was not just a possibility but a good way to see more of the world, meet new people, face challenges and get life experience as well as get a good job when she graduated.

Her TCHS volleyball coach, Harlan Barlow, said he has believed in Becenti's skills and discipline since he first saw her play during her freshman year.

"I could see that Kristen has not just the passion for the game, but she was strong and she also had the skills needed to win," Barlow said. "She plays the game so well. It's the little things. The way she hits, her footwork, there wasn't much to correct in coaching her. Her dad was her primary coach and she listens well to suggested changes in her strategy."

Becenti also acknowledged her dad for helping her to win and to enjoy playing the game.

"I took my dad's advice on not just volleyball but also on my school work. I am thankful for both my parent's involvement with me. They are so supportive," she said. "But also I am so grateful for my coach Barlow. They have all been so patient and helpful."

Barlow said Becenti will continue to succeed in both her sports and academic careers.

"Kristen is not just about volleyball," he said. "She also maintains a 4.0 GPA and is in National Honor Society. She is also the Division Three, Section One Player of the Year and she is just an all around good kid."

"She sends a positive message that with the right support and environment, that any one of these kids can also achieve this kind of success," Roe said. "Even though she suffered a knee injury last year and had to sit out a season, she learned from sitting on the bench too. I also think that the girls volleyball team has benefited from the weight lifting room at TC High, they have built up more lean muscle mass and that helps them with their confidence in playing aggressive volleyball. I've been watching Kristen and I'm so proud of her. She is finally reaping the rewards of all her hard work."