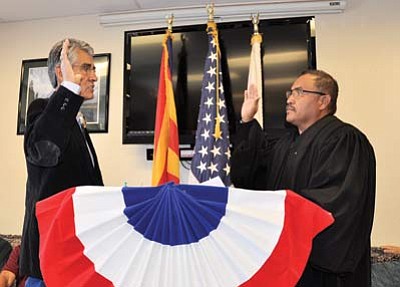 At a noon ceremony at the Apache County Office, Chinle Justice Court Judge Victor J. Clyde administered the oath of office to Shirley as about 60 friends, family and county officials looked on.

"To me, it's all about service to the people," Shirley said. "Giving service to the teeny person to the elderly. At day's end, as public officials, the people is who we work for, and I feel very honored to be getting back in there."

Shirley said he asked to take his oath on Dec. 4 because it was his 65th birthday.

He replaces former Apache County Supervisor Jim Claw who did not seek reelection and is retiring after 10 years as supervisor to spend more time with his family.

Shirley said he's spent 42 years in public service as he begins another term as supervisor. He previously served 18 years as supervisor.

Shirley stepped down as supervisor after being elected to his first term as Navajo Nation president in 2002.