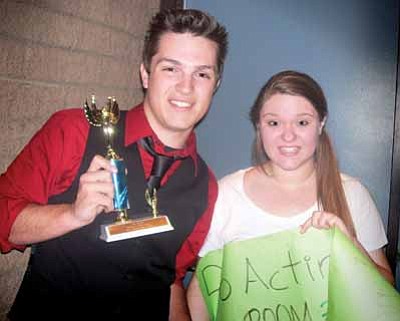 Two Winslow High School competitors earned state championships at the annual Forensics League of Arizona Winter Trophy Tournament. Emmett Foster is the State Champion in Dramatic Interpretation. He presented "Flanders" by Patricia Anthony, a story told from the point of view of a young soldier in the trenches of World War I. Brittany Fischer and Emmett Foster are State Champions in Duo Acting. Their selection "The Speech" is a humorous depiction of the effects of stage fright.

The Winter Trophy Tournament took place at Cactus High School in Glendale, Ariz. Nov. 30 and Dec. 1. Twenty-two 1 A, 2 A, 3 A, and 4 A high schools participated in the tournment. More than 300 students from schools state-wide competed in this annual event.

In addition to their trophies, Brittany Fischer and Emmett Foster will receive scholarships upon graduation.