Santa rides the rails into Winslow 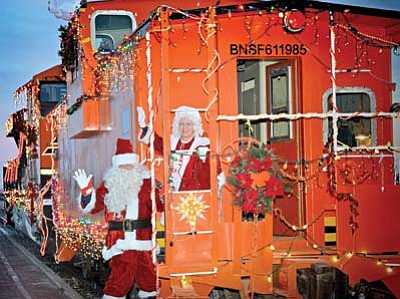 Santa and Mrs. Claus arrive in Winslow on the special Burlington Northern Santa Fe Santa Train Dec. 1. Santa greeted children who sat on his lap telling him what they wanted for Christmas. Santa gave each child a free stuffed toy while the children were kept warm by free hot chocolate as they waited their turn. The visits with Santa and Mrs. Claus began at 5:30 pm and continued until every child was accommodated. Santa Train is a yearly event sponsored by the City of Winslow Recreation Department and BNSF Railroad.