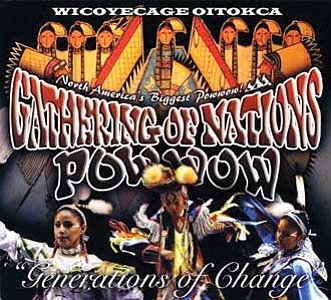 Generations of Change features 20 songs that portray both mellow moments of the powwow as well as the thunder of the loud drums. The album includes a bonus track that was performed by Midnite Express in memory of fancy dancer Jerry Cleveland Jr.

The album was recorded live at the 29th Annual Gathering of Nations Powwow by Audio Excellence of Albuquerque, N.M. In addition, it was produced by Derek Mathews, Dr. Lita Mathews, and Melonie Mathews of Gathering of Nations Records and engineered by Everen Goknar at Capitol Mastering/Capitol Records in Hollywood, Calif. The cover art was designed by Rusty Gillette of Bismark, N.D. Generations of Change is available and online at www.gatheringofnations.com and on iTunes.