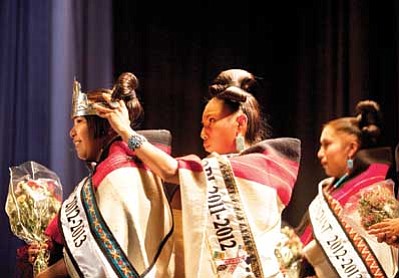 KEAMS, Ariz. - Hopi Junior Senior High School's relatively large auditorium was near capacity when more than 450 spectators from Hopi and surrounding communities came out to see the crowning of the new Miss Hopi. The Friday afternoon, July 27th event in Keams Canyon was not only a coronation but also a celebration of traditional Hopi values and how young women of the tribe can help preserved them.

"Miss Hopi is important to our community because it showcases our young women and their talent and how they give back to their culture," Nancy Yaiva, mother of the chairperson, said. "They are role-models for Hopi women, ambassador to the public and each is expected to have a platform."

This year's three contestants were whittled down from approximately 20 young women. In order to vie for the crown, contestants must be enrolled members of the tribe, be 18-23 years in age, never been married, be childless and come recommended by members of the community.

Radio consultant to Native stations, Bert Polei, recently returned to Hopi after being away for several years and was surprised by the pageant's popularity throughout the community and abroad. Now working for KUYI Hopi Radio and the night's co-MC, Polei was honored to be in the presence of so many traditional young ladies and their supporters.

Out-going Miss Hopi, April Pavinyama's platform was the conservation of natural resources and why teaching Hopi culture to the youth is important. Her mother Felicia Yaiva describes her daughter's reign as very busy and a great deal of work for the family but overall very positive. Pavinyama took a year off from studying environmental science in Tsaile, Ariz.'s Diné College to travel throughout Hopi and surrounding communities.

"It's been so much fun and went by so fast," Yaiva said. "We go on and off the reservation, everywhere."

Perhaps there was a small sense of relief and satisfaction for Pavinyama because she served her people well and now she would return to school and her life.

"It's a good feeling knowing that it's over and I'm proud of the girls for their achievements and hard work throughout the week and I couldn't say more about how happy I am for them," Pavinyama said. "I've done what I did for my people out of my heart and I hope that they remember me for all the good work I've done."

As the night wore on, each contestant had an opportunity to make their case to the judges. Their respective supporters made sure to voice their very loud approval every time their representative entered and left the stage.

Once the presentations and talents were considered and scores added up, Antone was quickly announced as the second runner-up. A mistake was made and some confusion ensued when it was announced that Poleahla was the first runner-up and thus Talayumptewa was Miss Hopi. After a few short minutes the Miss Hopi committee cleared the air and announced Poleahla as the new Miss Hopi.

The new Miss Hopi was credited with being the most traditional of the three contestants and better able to go into great detail about her culture in her native tongue. Poleahla recently lost her mother and has overcome shyness to compete in the pageant. She now plans to go around schools and warn young people of substance abuse and encourage them to listen to the elders and their wisdom.

"After tonight, I feel like I've accomplished something," Jacqueline Poleahla said. "Being Hopi feels so good and we are proud of who we are."