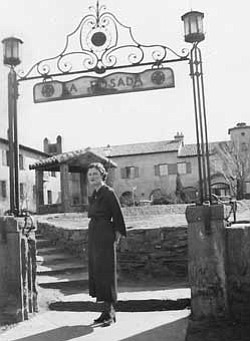 WINSLOW, Ariz. - The Winslow Centennial Committee and Winslow Historical Society continue celebrating the city's history with "Memories of Arizona's Harvey Girls." Join them for this special presentation on Saturday from 2-3:30 p.m. at the Winslow Visitors Center/Hubbell Trading Post, 523 W. Second St. This program is presented by members of the Winslow Harvey Girls, a group of volunteers dedicated to preserving the history of Fred Harvey, the Harvey Girls, and Mary Colter's La Posada Hotel.

Entrepreneur Fred Harvey opened a series of eating houses along the Santa Fe Railway that evolved into America's first restaurant chain. From 1876 through the 1960s, Harvey and his family introduced exceptional food, service, atmosphere, and value to westward travel, and one of their many innovations was the hiring and training of women to be "Harvey Girls." Through their fortitude and sense of adventure, the Harvey Girls helped settle the American West by marrying local men, raising children, and getting involved in their adopted communities.

After Peggy Nelson provides an overview of this rich history, each presenter will tell the story of a specific Harvey Girl who worked at La Posada or other Harvey House in northern Arizona. Janice Stewart will share her own experiences working at the Bright Angel Lodge at the South Rim of the Grand Canyon; Marie LaMar will share about her mother and aunt, who both worked at the Havasu in Seligman; and Nancy Hanno, Chris Pane, and Lenore Robertson will talk about Harvey Girls that worked in Winslow. There will also be a display of Harvey Girl uniforms from different eras and locations.

This event is one of the Second Saturdays in Winslow, a year-long series of programs that explore Winslow's diverse history in celebration of the Arizona State Centennial on Feb. 14, 2012. Visit them on Facebook or go to www.OldTrailsMuseum.org for the latest exhibit and program information.