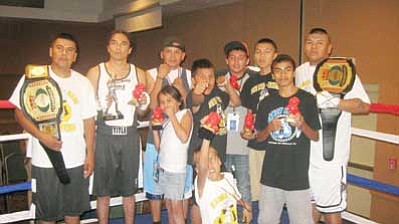 First up for the Damon-Bahe Boxing Team was John Yazzie (2012 Native American Amateur Boxing Champion). In a "Show Bout (140 pound weight class)" his opponent was John Garbow from Augusta Boxing Team. John Yazzie won the bout in 22 seconds of the first round with a Technical Knock Out (TKO).

Up next for the Damon-Bahe Boxing Team was Stanfred Mitchell (152 pound weight class). His opponent was Nelson Robertson (Augusta Boxing Team). Robertson won the bout on point decision.

There were seven bouts July 7 and the Damon-Bahe Boxing Team was in three. First up was James "Babycakes" Bahe (2012 Native American National Boxing Champion) in the 65 pound Banatum Show Bout. His opponent was Jaheim Willis (Stonehard Boxing Team). Jaheim Willis won a close bout by points.

"I am proud of the efforts of our team," said Coach John Bahe. "Their heart, dedication, and hard work has paid off they are all champions in my eyes and as coaches we are very proud of them."