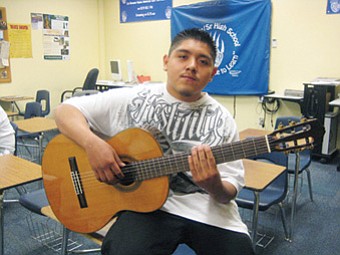 Xavier Sakeva practices on his guitar.

Sakeva, a junior, said the awards show that he has improved, although Hopi High music teacher Thomas Irwin said going into the festival that he expected Sakeva to win.

Sakeva's parents, Fawn Toya and Alfonso Sakeva Jr., attended the Friday event, but the Saturday performance was closed to the public.

"My parents said they were proud," he said.

Sakeva played Rosebuds in June and Juropo in the guitar ensemble in Many Farms and then performed Russia Waltz for his winning solo piece.

Irwin said the awards were nice for Sakeva, especially since he suffered a wrist injury earlier in the year.

"Xavier is a talented young man," Irwin said. "He's more talented then he realizes. He has a lot of potential. If he works hard, he can be a good musician."

Irwin said the awards give Sakeva an idea of his potential.

The Many Farms Festival was reservation wide, but Irwin said Sakeva performed well when he placed second in the Grand Canyon Guitar Society's statewide invite.

"I look forward to teaching him next year," Irwin said. "We'll have a good advanced group next year. It's looking good."

The performances were based on five ratings with superior as the highest rating and excellent as the second best rating. The Hopi High jazz and percussion groups received superior ratings and both guitar units earned excellent ratings.

"Everybody did well," Irwin said. "It was a good festival. We look forward to returning next year."

Choral and graphic art groups also competed at the Many Farms Festival.

Sakeva said he became interested in the guitar because some of his friends played, but he is self-taught, although he adds that Irwin has helped him improve his guitar playing.

"I hope to attend a guitar camp in California this summer and then keep playing next year," he said.

The Hopi High guitarists will have a coffee shop today and the Hopi High music groups will perform a concert May 2, both at Hopi Jr/Sr High School.