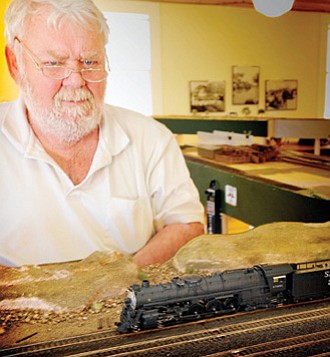 Paul Thompson from “Glendale FEMO” explains details of the model train layout at the Hubbell Center on April 20.

The group at Sno Drift was from Las Vegas and the set up at Hubbell was from Glendale, Ariz. named "Glendale AZ FEMO." FEMO is the name of a type of model train system, which originally started in Germany. This style of model train is a standardized system and is designed so that many individuals can bring a section/s and connect to others, creating a large integrated layout.

FEMO came about from model train owners living in apartments enabling them only a small system, but which could be easily combined with others, creating a sizable layout. In Europe today FEMO model train railroaders get together and create model train systems, which cover small convention centers. Admission was free.