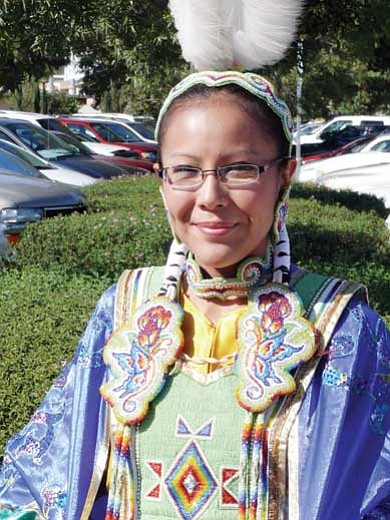 Urseloria Kanuho will perform April tomorrow through Saturday in Albuquerque.

ALBUQUERQUE, N.M. - Urseloria Kanuho, from Tuba City, Ariz., has been selected as the Head Lady Dancer for the 29th Annual Gathering of Nations, the world's largest gathering of Native American and indigenous people. The Gathering of Nations, considered the most prominent Native American powwow in the world, will host tens of thousands of people and more than 500 tribes from throughout the United States, Canada, and around the world celebrating their culture and traditions through dance, music, and indigenous dress including feathers, bells, jingles and fringes. The powwow takes place in the University of New Mexico's University Arena (known locally as "The Pit") in Albuquerque, N.M. tomorrow through Saturday.

The head man and head lady dancers are chosen to represent all adult dancers at the powwow. They are selected for the position based on their knowledge of traditions, their previous dancing awards on the powwow circuit, and also for being good ambassadors of their tribe and culture. The head dancers will lead the dancers during the powwow's grand entry.

Head young man and young lady dancers have much the same responsibility as head man and lady dancers. They have been dancing since they were infants and serve as role models for other children in the competitions.

The three-day event will include more than 3,000 traditional Native American singers and dancers. They will compete in the 12 dance categories and entertain a capacity crowd at the Pit. More than 800 Native American artisans, craftsmen, and traders will display and sell their work. In addition, dozens of indigenous bands will be performing a variety of musical genres including country, reggae, rhythm and blues, hip-hop, and rock 'n' roll. Vendors in the Native Food Court will offer guests a wide assortment of food choices ranging between southwestern-style cuisine and traditional Native American fare.