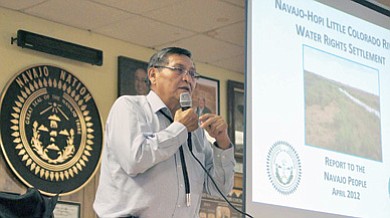 "Let us listen to our people. Water is sacred. Water is holy. We shouldn't be fighting about it," President Shelly said during his opening remarks during the beginning of the third Little Colorado River Water Settlement meeting April 19. More than 220 people attended the meeting overall.

President Shelly's statement comes after two prior water settlement meetings in which some people became openly angry in voicing their opinions.

Through the four-hour meeting, about 25 people presented their ideas to President Shelly, some Council Delegates and a few members of the Navajo Nation Water Rights Commission.

According the Little Colorado River Settlement, Ganado and nearby communities would benefit from the settlement by receiving about $73 million for the Ganado Groundwater Project.

The Navajo Nation would receive more than $200 million overall for two water projects on the Navajo Nation, a feasibility study for future water lines, and to develop water management plans.

The plans would have a main water line from Burnside Junction to Ganado and south to Wide Ruins. According to the 2010 Census, the areas near the water line constitute a population of about 2,500 people.

According to the data from the Navajo Water Commission, the current amount of water used in the area is about 381 acre-feet per year. The pipeline would bring more than 5,500 acre-feet per year of drinkable water to people on the water line.

Using water from the pipeline could reduce the dependence on area wells for drinking water, which would potentially allow water tables to replenish themselves with natural rainfall.

At the meeting, Council Delegates Jonathan Nez said that he was there to listen to the comments.

"This is really a good opportunity for us as delegates to listen," Nez said to the audience at the end of the meeting.

President Shelly reiterated that he is listening to the people before he takes a stance about the water settlement.