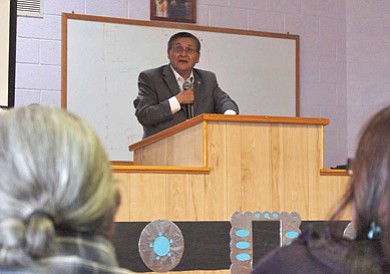 "The water settlement has not approved by the Navajo Nation," President Shelly said, adding that concerned people can also speak to their Council Delegates, in addition to speaking at a water settlement forum.

He added that the water settlement has to go through the Navajo Nation Council first, before it comes to the President office.

"There is a process," President Shelly said.

The President urged Navajo people concerned about the settlement to learn about it and proactively suggest solutions and recommendations for the settlement.

"We want to see you have a voice in the settlement," President Shelly said in his closing remarks after a four and half hour-long town hall style meeting at Pinon Chapter House on April 18.

The chapter house was filled to capacity of about 150 people, but as people left the meeting, people in a line awaiting entrance to the chapter house were allow to enter the building, bringing the total number of attendees to about 300 people.

About 20 people spoke after an hour and half long 44-slide power point presentation regarding the settlement. Navajo Nation Water Commissioners Ray Gilmore and Leo Manheimer gave the presentation.

Most of the people spoke against the settlement.

"You're saying 'no,' we understand that," President Shelly said, while asking for solutions and recommendations from the attendees.

Some spoke out against the presentation saying that is was too long, but the President responded.

"We wanted to make sure the people have a full view of the presentation," President Shelly said.

However, about a dozen young people in the audience were openly upset about the format of the meeting. Each person addressing the leaders was given a few minutes to speak, and the speakers had to sign in to speak. The younger crowd grew restless as the meeting entered its last hour. Two of the young people began to raise their hands to speak.

Bessie Yellowhair-Simpson, who moderated the meeting, reminded the audience of the process to speak at the meeting and asked the people to quietly wait their turn.

"We still have questions," one young woman said.

While a community member was trying to speak, some of the young people continued their loud interjections. Yellowhair-Simpson attempted to settle the bursts of comments by pleading with the young people to no avail.

Then an elderly woman from Pinon, who offered the opening prayer, spoke to the audience in Navajo and some English and pleaded with the young people to be respectful of the speakers.

After she spoke for a few minutes, the meeting started closing with some closing remarks from President Shelly and Vice President Rex Lee Jim.

The following is a schedule of remaining water settlement forums all of which are scheduled to start at 4 p.m. and end at 7 p.m.