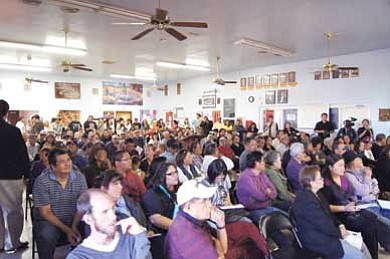 "I am still learning just like you are," he told the nearly 230 people in a standing room only chapter house Tuesday evening.

The Office of the President and Vice President in coordination with the Navajo Nation Water Rights Commission organized the water forums to educate concerned citizens about the Little Colorado River Water Rights Settlement Act, introduced into the U.S. Senate in February.

The forum started with a more than 40 slide power point presentation that relayed information from basic definitions of water rights, maps of the affected settlement areas, and the breakdown of how proposed money would be spent to develop water infrastructure if the settlement was approved.

The power point presentation lasted more than an hour and while the chapter house was filled with people, about 60 people, some of whom held signs in protest of the settlement waited outside.

After the presentation, the floor was opened up for questions from the attendees and more than 20 people had five minutes to pose their questions and or make statements to the leaders present.

Most of the statements were against the settlement, some cited Navajo cultural teachings that the water was too sacred to consider giving up, others stated they didn't want to give up water rights, while others said Senators John McCain and Kyl weren't to be trusted.

Leaders responded to questions and statements throughout the night.

"Do you guys have a safety net," one woman asked leaders after the meeting, reiterating a common sentiment by some concerned citizens.

The Little Colorado Water Settlement Act proposes about $358 million would go to the Navajo Nation and the Hopi Tribe for water infrastructure projects, which two-thirds of that money going to Navajo.

People wanted to know if the Navajo Nation approved the settlement, would Congress get the money to the tribes.

Water Commissioner Ray Gilmore said the Congress has to allocate money to the projects otherwise the Navajo Nation gives no waivers.

According to documents, the settlement has to be funded by 2022.

Water Commissioner Gilmore also said that about 220,00 acre feet flows through the Little Colorado per year, and the Navajo Nation would gain access to 160,000 acre feet per year with the settlement. That amount would be in addition to the unlimited access to the ground water.

In a meeting last month, Sen. Kyl told Navajo leaders that he would only push the bill through Congress if the Navajo Nation and the Hopi Tribe approved of the measure.

The following is a schedule of remaining water settlement forums -