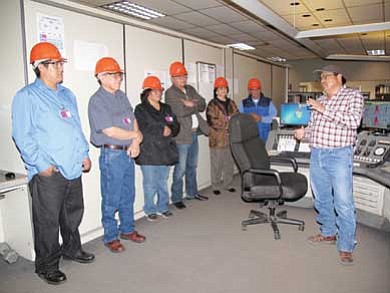 LECHEE, Ariz. - Eight Tonalea Chapter officials and staff visited the Navajo Generating Station (NGS) to learn how it operates, how it benefits area communities and their residents, and what impacts would occur should it close.

The Tonalea Community Land Use Planning Committee became the first chapter organization this year to request a tour of the power plant, meet its employees and have questions answered by the people who do the work. The group visited the outdoor coal yard, walked alongside the massive indoor turbine deck where electricity is made, went up to the 203-foot level at the highest point of the plant, and saw the control rooms and water laboratory.

Claw said he was pleased to see for himself that Navajos make up the majority of employees at the plant.

"Like they said, 80 percent of the employees are Navajos. That's true," Claw said. "They talked to us in our language which we can understand, which was good, and that's good information coming from a Diné, a Navajo in there, in front of the computer."

Among NGS's 540 employees, the officials met Julius Fat, an NGS control room operator who has worked at the plant for 10 years.

"I had to start at the bottom like all the rest and you work your way up," Fat explained in Navajo to the officials. "I began at the coal yard."

Fat, who grew up at Navajo Mountain, said he started at NGS in 2001 with a 10-week-long course in power plant fundamentals, took another four-week-long course to become an Operations & Maintenance II, and then advanced to the third level as openings became available.

"It took me five years to get to O&M III and then began training for the control room position," he said. "It takes a lot of training and studying to get here. We have many of our own people working in here as operators - men and women."

Fat said his job in the control room involves watching every area of the power plant, from the water intake to steam production to the creation of electricity in the generators, and all of the pollution controls.

On a wide console before him, 16 computer screens monitor thousands of readings and all of the parts within the huge 2,250-megawatt power plant that makes enough electricity for 3 million people.

Every action that control room operators perform is documented, he explained, and whenever something is not working correctly, the equipment notifies him immediately so steps can be taken to address it.

"This is the kind of work I do. It's a very rewarding job," he said. "We hear a lot of negative stories about the plant, but it is a safe-running plant. It's not dirty. It's not filthy."

"In last five years, we've trained over 250 Navajos - 100 percent of the new work force," he said. "There's a lot of people out here that are ready to retire and a whole new generation of young workers that are ready to run this plant going forward."

Ostapuk said building NGS was first suggested by former Interior Secretary Stewart L. Udall in order to prevent two "book-end" dams from being built at either end of the Grand Canyon.

The proposed Marble Canyon and Bridge Canyon dams were to be constructed to produce electricity to power pumps for the Central Arizona Project to deliver Lake Havasu/Colorado River water to Phoenix and Tucson.

In the 1960s, the Sierra Club mounted a national campaign to prevent the dams from being built, claiming they would have flooded 93 miles of the inner gorge of the Grand Canyon. Today, 95 percent of the power needed by the CAP comes from NGS instead.

"It was part of an environmental compromise," Ostapuk explained. "We had water in Lake Powell, we already had transmission lines here, we had coal on the Navajo Nation, and there was interest in creating some kind of economic opportunity for the Navajo Nation. So that's the roots right there of NGS."

Long-term investments have been made by NGS's six owners in both pollution controls and maintenance of the power plant, he said.

When construction of NGS began in 1969, the plant was built with "electrostatic precipitators" that remove 99.5 percent of the particulate fly ash after the coal is burned. Within each of the power plant's three units are 16 chambers with 96 fields that use electrodes to charge the particles with electricity to collect the ash on oppositely charged plates.

The captured fly ash is then recycled and sold as a valuable byproduct. It is used to help make concrete flow smoother, set up stronger and reduce energy use by the concrete industry, Ostapuk said.

One company that uses fly ash is Navajo FlexCrete Building Systems, Inc., in LeChee, that manufactures light-weight construction blocks as a building material.

In the 1990s, as part of the Navajo Visibility Agreement with the Grand Canyon Trust and the federal government, NGS invested $420 million to install "wet limestone scrubbers," otherwise known as flue gas desulfurization systems, to remove 95 percent of the sulfur dioxide from the plant's emissions, Ostapuk said.

"This was the primary pollutant we were trying to keep out of the Grand Canyon," he said.

He explained that limestone rock is crushed to a powder, mixed with water to create a slurry-like paste, and then sprayed to create a chemical reaction that eliminates SO2 to create harmless calcium sulfate instead.

Otherwise known as gypsum, the byproduct is used to make drywall.

"What we've done is like a two-stage carburetor," he said. "NOx is formed whenever you have a hot burning flame. NOx is formed in cars in the cylinder with the spark plug."

"You can let it form and scrub it out, or a low-NOx burner prevents it from forming in the first place," he said.

A low-NOx burner is a mechanical process that controls combustion air in the boilers to reduce NOx emissions by almost half, he said.

The alternative process of removing NOx after it has formed involves expensive technologies that could cost as much as $1.1 billion, he said.

NGS's environmental report card shows the plant has always been in compliance with environmental laws and regulations, Ostapuk said.

"We're not at zero but we've shown good progress each decade, and the owners have acted responsibly here at the plant," he said. "You can see for yourself that the owners do care about this facility, the cleanliness of the plant."

This summer, the federal EPA is expected to decide whether NGS's current pollution controls are sufficient or whether additional controls are needed. In the meantime, SRP continues discussions with the Navajo Nation to renew the plant's lease that is scheduled to expire in 2019.

Should the EPA rule that more pollution controls are needed before the lease is renewed, NGS's owners may decide the $1.1 billion cost is too expensive for the short-term remainder of the current lease, and could close the power plant - despite the fact that it has been so well maintained that it could operate efficiently for another 50 years, Ostapuk said.

"If the plant shuts down prematurely, there will be a loss of royalties and scholarships to the Navajo Nation," he explained. "If Navajo people were to leave this area, you would have an erosion of Navajo culture."

He said the inevitable economic ripple effect would cause people to leave for jobs elsewhere, causing local property values to fall, businesses to close, and even the school district to suffer as enrollment declines.

Worse yet, Ostapuk said, is that young Navajo professionals who work at the plant would be forced to relocate to continue their careers as engineers, chemists, control room operators, fabricators, welders, managers and support staff.

"There's a whole new generation of workers here," he said. "These jobs are good jobs."

"That's about double what you normally have as a wage in Coconino County," he said.

As an elder who advises the Tonalea Community Land Use Planning Committee, member Henry Carr said it is important that when people tell you something, you need to go see for yourself.

"Then you know it's true," he said. "And what I saw today is not what I was hearing (about the plant). I hear a lot of young people saying, 'I got a good job here.' I know you're doing it for the young people, and I like that. The plant is clean. What is coming out is not all smoke. That's what people have been saying. But I saw for myself. I understand what this plant is now."

Greyhills Academy High School teacher Stella Claw said the tour was a good experience for her as an educator because she learned the plant provides employment for high school graduates as well as those with college degrees.

"This is like a good educational experience for all high school students that want to major in math and science," she said. "They also provide scholarship funding for students that want to further their education. So I think this would really benefit other schools as well as the people out in the community. I had a good time and I really enjoyed the tour."