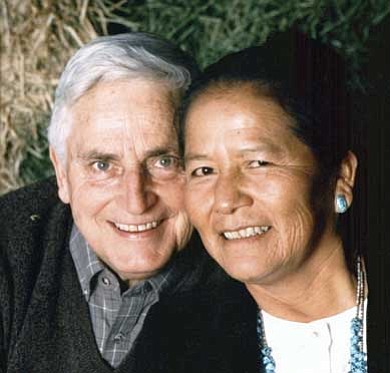 Dr. Robert A. and Ruth Roessel

CORTEZ, Colo. - Ruth Roessel, a visionary in Navajo education, author, community leader, and champion of Navajo teachings died early Friday, April 13, 2012, in Cortez, Colo., after a brief illness. She was 77.

She was born in Round Rock, Ariz., in 1934. As a girl she attended Bureau of Indian Affairs boarding schools. The experience, which she did not enjoy because of long periods of separation from her family, led her and her late husband, Dr. Robert Roessel Sr., to formulate groundbreaking concepts in Navajo education and self-determination, which emphasized a western-styled curriculum blended with Navajo history, culture and language.

Together, the Roessels are remembered for their work and dedication that led to the founding of both the Rough Rock Demonstration School in 1966 and Navajo Community College, now Diné College, in 1968.

"Robert A. Roessel, Ruth Roessel, and other enlightened educators and BIA officials had a belief that the tribal group and reservation boundaries provided the necessary structure needed to start a community college," wrote Montana State University Professor Wayne J. Stein in 1990. "They also believed that the community college designed and founded correctly would be a major part of the answer to breaking the destructive cycle of poverty which had grown up on the Navajo Reservation. They began by convincing the Navajo Tribal Chairman, Mr. Raymond Nakai, and the Navajo Tribal Council, that a college could work on the Navajo Reservation, especially if the Navajo culture was correctly understood and used as a foundation block within the philosophy and curriculum of the college."

Throughout her life, Mrs. Roessel embraced what she taught as an educator and lived as a Navajo person. She learned to weave when she was 5-years-old and continued throughout her life. She earned her bachelor's and master's degrees in education from Arizona State University, and instilled in her children and countless students the value of education.

She and her husband devoted three decades to helping the Navajo people maintain their cultural identity, know their history, embrace the Navajo language, and treat others with respect and k'e.

The Rough Rock Demonstration School, now the Rough Rock Community School, was founded as the first Native American-controlled community school in the country in 1966. It was created on a foundation of Navajo language, history and culture along with academics. The late Dr. Roessel returned to the school in 1997 as executive director and was succeeded by their son Dr. Monty Roessel, who was appointed associate deputy director of the Bureau of Indian Education of Gallup, N.M., last year. The school will celebrate its 46th anniversary in June.

Among the first Navajo Nation schools where the Roessels taught was Low Mountain where they met an eighth grader named Peterson Zah.

"She was a Kiiyaa'aani and I'm a Kiiyaa'aani," said Zah, who went on to become chairman of the Navajo Tribal Council and was the first Navajo Nation president. "So we accepted each other not as friends but as a brother and a sister."

"Ruth was just an extraordinary individual who cared so much, not only for her own family but for her extended family and all the students she ever knew," Zah said. "She is a fine example of what being a Navajo woman is all about, and what Navajo women should be. And she exhibited those kinds of skills of what a mother and grandmother should be."

Zah said Mrs. Roessel probably had the greatest influence on him to become a teacher and educator. In later years, when he became Navajo chairman, he called upon both Roessels to help raise private funds to construct the Navajo Education Center and the Navajo Nation Museum in Window Rock.

"We went around, Bob and I, and Ruth and my wife, to New York, San Francisco, Denver, Salt Lake City, Washington," Zah said. "We raised funds and we were working closely with people like Robert Redford and Tony Hillerman. We went around with them and raised $8.8 million."

Mrs. Roessel was known throughout the schools she taught at and within her community as everyone's mother, he said.

"She was just a good mother, a great sister, an innovator, a motivator, and she carried the Navajo culture for her family," he said. "She is a faith keeper and, through her, all of the Navajo traditional beliefs just kept on spinning. That's her."

Sen. Jack Jackson Sr., recalled working with Mrs. Roessel at Diné College. "She was a beautiful woman," he said. "She was always very joyful, a happy going woman, making people laugh. She was a good teacher. People liked her. Students liked her. I think she made Bob happy. She had wonderful kids, wonderful family, very, very intelligent family."

Sen. Jackson said she and Bob will always be remembered for helping establish the first Native American-controlled community school in the country.

"In the early '50s, she and Bob promoted a different kind of education, where they put the dual system of Diné education with western education," he said. "It was strong with Navajo language, culture and history. They believed in that and that's what they practiced."

"She did a lot for Navajo education," he said. "So she gave her life to educating our Navajo students."

Johnson Dennison, a Navajo medicine man and educator, said he got to know them in 1953 when Robert Roessel first moved to Round Rock.

"She and he were the most respectful couple in the field of education," Dennison said. "What they taught continues to live and continues to be. What she has given to the people is what they use. She lived k'e in her quiet way."

Besides publishing numerous academic papers and articles, Mrs. Roessel was the author of five books on Navajo history, culture and education. These include Navajo Livestock Reduction: A National Disgrace ; Navajo Stories of the Long Walk Period ; and Women in Navajo Society .

Mrs. Roessel is survived by her five children; Faith, a lawyer, of Bethesda, Md.; Mary, a psychiatrist in Santa Fe, N.M.; Robert, an engineer in Phoenix; Monty, associate deputy director of the Bureau of Indian Education of Gallup, N.M.; and Raymond, a hydrologist in Phoenix; 12 grandchildren and one great-grandchild.