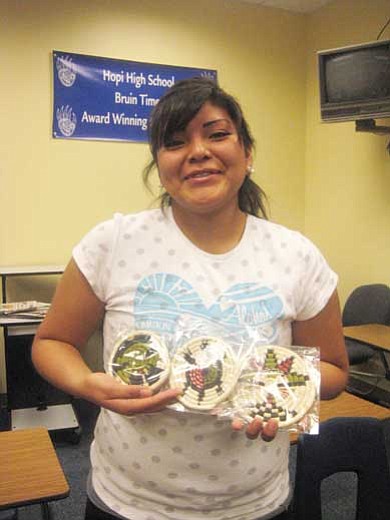 POLACCA, Ariz. - Jewel Kagenveama was able to see another part of the world thanks to her artwork.

Kagenveama, a senior at Hopi High School, had a paid trip to Osaka, Japan, to show off her Hopi coil baskets at a Hopi silversmith exhibition at the National Museum of Ethnology. She has been making the Hopi coil baskets for seven years.

She credits her grandmothers Evangeline Talahaftewa and Bertha Wadsworth as well as her mother Rowena Kagenveama with teaching her the craft.

Kagenveama said she learned that she could use her hands and creativity to make it anywhere in the world by working hard.

The National Museum of Ethnology paid for her round trip flights as well as her rooms and meals. She also sold two of her baskets in Japan. But, more importantly, she liked the Japanese people.

"The Japanese are pretty cool, even the little children," she said. "Everyone shows respect."

Kagenveama had a chance for some sight seeing.

The best part of the trip was going to the Temple of the Buddah," she said. "That is such a splendid art form. I will never forget. Plus, the deer are fearless of the people that they walk right up to you."

The deer were running free on the temple site. People were feeding them freely.

"It was such an amazing site to see," she said.

There were several stores just outside the temple.

She said the trip could have been improved if they had a chance for more sight seeing, but she was thrilled with Japan. She didn't have much time for sightseeing because preparing for the art show took up most of her time.

After the show, her group was invited to the Governor's house for dinner. They sat in a guest room with no chairs. Hopi flutist Jose Fred played some tunes and gave one to the governor's assistant for helping the Hopi group come to Japan.

"The house was so nice I didn't want to leave," Kagenveama recalled. "While we ate, this lady named May showed her tiquando. It was amazing. After that, we shared songs: teaching them some of the Hopi songs and them showing us their songs."

Kagenveama was impressed with Japan.

"Japan is a tremendous site to see. The country is dedicated and educated," she said. "The people there are so well mannered, unlike our country they treat everyone nice."

This is one trip that Kagenveama will remember starting with the 13 hour plane flight.

"I had never flown on a plane before so this was a breath taking experience," she said.

She quickly noted that the hotel rooms were extremely small, about half the size of American hotel rooms. The first place they ate in Japan was McDonalds.

"But it was different. Some burgers had some kind of sauce in them which made it taste weird and the fries still taste the same," she said.

Kagenveama had a little trouble ordering because the workers barely understood English.

On the morning that they were getting ready to leave Japan, a lot of people came by their hotel to give them gifts and take photographs with them.

"When we departed from Osaka, I was sad because I never got to see a place so amazing that I may never see again," she said.

Kagenveama hopes to go back to Japan some day.

"I consider this to be the best senior trip ever. I want to proceed with my education to get back over there," she said.

Kagenveama plans to major in business management in college so that she can open her own gallery.