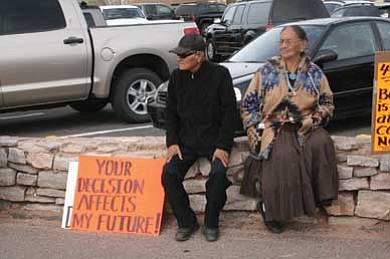 In addition, one venue has changed. The April 17 forum scheduled for Greyhills High School Auditorium will now be held at the Tuba City Chapter House.

"I want our people to know what's at hand here with this agreement. We are going to make sure we answer questions from our people. We want them to have accurate and factual information," President Shelly said.

Since the announcement of S. 2109, sponsored by Sen. Jon Kyl, some Navajo people have voiced their concerns about the bill.

Sen. Kyl and Sen. John McCain said the bill does not move any further than introduction within Congress without approval from the Navajo Nation and Hopi Tribe.

President Shelly asks people to keep an open mind about the settlement.

"If we don't get this done, we will have to fight for our claims in a state court and then there's no telling what the outcome may be," President Shelly said.

The settlement would bring about $220 million for groundwater projects, a Leupp- Dilkon water pipeline and a Ganado-Wide Ruins water pipeline.

Additionally the Navajo Nation would gain unlimited use to the C-aquifer and hold rights to use all unappropriated flows of the surface water from the Little Colorado River.

"We are going to present facts. Yes, settling water rights can be scary, but we must think about the alternative of no settlement, which includes having a state court decide for us. In this settlement we get unlimited use of the Little Colorado River and C-Aquifer. In a state court decision this will likely not be the case," President Shelly said.

Here is an updated list of water settlement forums, which will take place from 4-7 p.m.