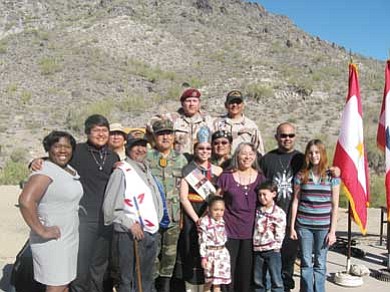 Standing together after a memorable sunrise ceremony at Piestewa Peak on March 23 are Geno Talas, Royce Jenkins, Leonard Talaswaima, Phillip Quochytewa and Princess Kelleigh Lynch-Sewequaptewa — all of Lori Piestewa Hopi Post No. 80 from the Hopi Reservation. Also pictured are Terry and Percy Piestewa, parents of PFC Lori Piestewa along with grandchildren and some of their closest family members.

PHOENIX, Ariz. - Standing together in humble reverence and devoted appreciation at sunrise on Piestewa Peak, this year's Ninth Annual Sunrise Honoring Service in remembrance of all veterans from all walks of life, living and deceased brought together the largest crowd ever. The event started after PFC Lori Ann Piestewa, the first Native woman soldier to die in a foreign war, was killed on March 23, 2003. Piestewa died in Nasiriyah when she was struck by mortar fire while serving with her fellow soldiers in the 507th Ordinance Maintenance Company.

PFC Piestewa, the eldest daughter of Priscilla and Terry Piestewa, was born in Tuba City at the heart of Hopi and Navajo country. She was of both Hispanic and Hopi bloodlines.

Piestewa enlisted with the hope of bettering her chances of education and future employment after her tour of duty to help care for her two small children she was raising alone.

After her tragic death, Piestewa's mother nicknamed "Pie" - and her father Terry are now full-time "Mom and Dad" to Piestewa's young daughter Carla and older brother Brandon. The family resides in Flagstaff. They are lovingly supported by relatives, particularly their uncle, Waylon Piestewa, who is Lori's brother.

Each year, on the anniversary date of her death, her family joins a variety of Native veterans groups, members of Piestewa's 507th Maintenance Company, Native musicians and dozens of well wishers to honor all veterans who continue to serve. The groups also remember and honor those who have fallen during the special sunrise service on Piestewa Peak, which was named in Lori Ann's honor several years ago.

Master of Ceremonies, Mary Kim Titla, a former news anchor in Phoenix and member of the the San Carlos Apache Tribe, presented several groups of tribal organizations and musical presenters during the sunrise event and special evening closing service.

The Phoenix Oyate Singers sang two versions of the flag song after the "National Anthem."

Special runners from the Cheyenne-Arapahoe Nation brought in the memorial staff that had hawk feathers tied to it, which signified the strength and speed to carry prayers and messages swiftly to the families of the fallen heroes and prayers to the Creator in honor of these service sacrifices. The staff was also wrapped with red colored yarn to signify the blood lost by the fallen soldiers giving their lives for the protection of their country.

Son of Carletta Piestewa, sister to Lori, Jalen Scott, ran the memorial staff from the Piestewa Peak entrance up to the honoring memorial event point, leading the visiting Honor Guard groups and the Honor Riders from both Hopi and Navajo nations to the service. Joining the Hopi and Navajo Honor Rider groups were also Patriot Guard Riders, and the Brothers from the Rez Riders.

Hopi Lori Piestewa Post No. 80, who traveled from Arizona's northern-most area, the Hopi Reservation was also on hand with current Command Post Leader Alfred Lomahquahu and new Post No. 80 Princess Kelleigh Lynch-Sewequaptewa, who made her inaugural appearance at the sunrise service.

Statements by both former POWs and members of the Piestewa family were also given about the special sunrise service and their appreciation for all service personnel in all branches of the military.

A final prayer and song by Vernon West and the Phoenix Oyate Singers closed the program.