Guest column: Kyl's bill will lead to desecration of Sipaapuni 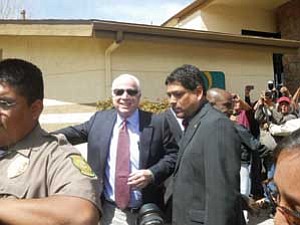 Sipaapuni, which is the holiest of Hopi religious shrines - a place of emergence to the Fourth World - is an integral part of the Little Colorado River (LCR) system.

It is ironic and laughable that the Hopi Tribal Council has unanimously agreed to oppose the Navajo resort while they are supporting the Kyl Bill that will lead to desecration of Sipaapuni, if enacted into law. A violation of Sipaapuni is a violation of Hopi religious freedom that is protected under the United States Constitution.

For this reason alone, the Kyl Bill must be stopped in its tracks. Would Senators Jon Kyl and John McCain sponsor a bill if they knew it would desecrate the Vatican, the Torah, and Koran?

• Kiisiwu - a shrine to the north is located on Navajo land. A pilgrimage is made to Kiisiwu during Powamuya and Niman ceremonies.

• Nuvatukya'ovi - the southern shrine, home of Katsinum, known as the San Francisco Peaks.

• Sipaapuni - it is through Sipaapuni that Hopi ancestors came here from cities somewhere in the south, Paalatquapi, being one of them. Sipaapuni also lies within the boundary of Navajo land. It is our umbilical cord to Mesoamerica from where we came into the Fourth World.

There are many other shrines connected to these shrines, which Hopi religious practitioners use to keep the earth vibrating, keeping the world in balance, and praying for peace and harmony throughout the World.

Kiisiwu is impacted by Peabody's coal and ground-water mining. Nuvatukya'ovi will soon be impacted by artificial snowmaking made from reclaimed effluent water.

Sipaapuni is located on the LCR just before it reaches the big river. The mineral water that comes up and down, like it is breathing, is connected to the river. Under Senator Kyl's water rights settlement, it will be left exposed and unprotected because of a covenant not to sue non-Indian users, Navajo Nation, and the federal government for damages.

If the Navajo and Hopi Little Colorado River Settlement Act becomes law, the Hopi Tribe will never sue upstream users for severe damages done to the little river and Sipaapuni. Nor will we sue the Navajo Nation.

The Cameron Chapter of the Navajo Nation is planning to build a huge resort above Sipaapuni. They want to construct an elevator to take tourists to gawk at Supai.

For this reason alone, all Hopi Sinom and their allies must join hands, and stand together to defend Sipaapuni. It must be done in the year 2012, when the 5,000-year-old Mayan Calendar will end.

Kyl's water legislation is supposed to settle the Hop-Navajo Indian water rights claims to the LCR, but his main reason is to save Navajo Generating Station and Peabody Coal Co. to produce cheap electricity to bring water to Phoenix and on to Tucson. He is using the LCR Settlement as a vehicle to accomplish his task.

Kyl has tied the LCR Settlement to the 2004 Arizona Water Settlement Act, Boulder Canyon Act, Navajo Generation Station, Peabody Coal Co., and the Central Arizona Water Conservation District. It is no wonder people are confused, even the lawyers.