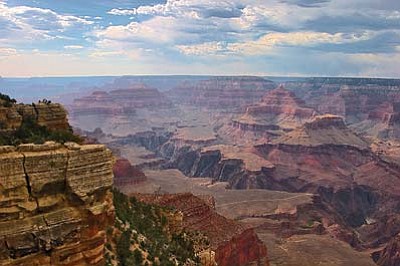 "Öngtuvqa, the Grand Canyon, and Paayutuvqa, the Little Colorado River Gorge, are sacred places and considered aboriginal lands," said Hopi Chairman LeRoy Shingoitewa. "They are of significant importance in the cosmology of Hopi culture, traditions and way of life."

Many cultural and religious sites in this area are of ancient stewardship interest to the Hopi Tribe including petroglyphs, ancestral sites, pilgrimage trails, natural resources and springs. A 1934 land settlement compact between the Hopi and Navajo Tribe emphasizes the protection of cultural and religious sites and this latest development may be in violation of the compact.

The Hopi Salt Trail, which is of religious significance, will be directly impacted by this proposed development. This trail is a part of Hopi evidence submitted to federal court in the 1990's documenting on-going interest and use of the trail and the Canyon.

"The Navajo Tribe is remiss in not consulting with the Hopi Tribe and its traditional leadership before moving towards development. Every tribe that considers the Canyon important and sacred should protect it rather than commercially exploit it. The Hopi Cultural Preservation Office has prepared a nomination to place the Grand Canyon on the National Register of Historic Places so it is essential that no development occur," said Leigh Kuwanwisiwma, Director of the Hopi Cultural Preservation Office.

The Hopi Tribe supports the National Park Service's objections to the proposed development and adamantly opposes any development in the area.