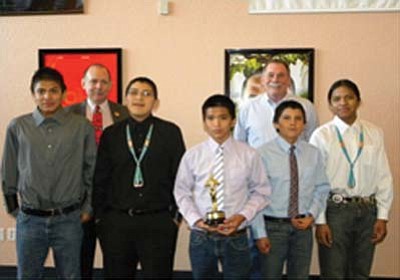 All winners received trophies and cash prizes at the conclusion of a "red carpet" ceremony at WME Theaters in Lakeside. Theater owner Teddy Croney had donated the use of a theater so all 12 contest entries could be viewed by the entering students and their friends and families. All of the student entries are uploaded to YouTube under 'Navajo County Attorney's PSA Contest,' so that the students who were not able to attend the ceremony can view theirs and the other entries.

"Thanks to Teddy's generosity, even those who didn't win trophies enjoyed free popcorn and sodas," Carlyon said.

"We have another student poster and video contest currently open," said Jaquel Moody, Victim Services Manager for the County Attorney's Office. "The deadline for this one is April 2, and the winners will be announced at our third annual Victims' Rights Symposium on April 27 at the NPC Performing Arts Theater in Snowflake."

Moody said the top three winners in the poster and video categories will receive cash prizes and trophies and be recognized at an awards luncheon during the symposium. She said last year's contest drew more than 50 poster entries and eight video entries.

Further information about the poster and video contest is available from Moody at Jaquel.Moody@navajocountyaz.gov or (928) 524-4332.