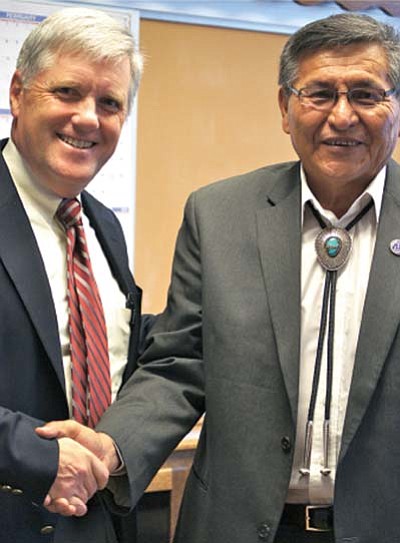 "This water settlement is very important for the Navajo Nation, and we are prepared to continue forward with the Little Colorado River Water Rights Settlement," said President Shelly during his meeting with Deputy Secretary Hayes. "The Navajo Nation needs the Department of the Interior's support for the delivering of Central Arizona Project (CAP) water to Window Rock."

During his conversation, he also requested DOI protect the Navajo Nation's potential claims to the Colorado River and assist in pursuing such claims.

"The Navajo Nation is continuing its support of the Navajo Generating Station and is currently negotiating the terms of a lease renewal," said President Shelly.

During the meeting, representatives from the Navajo Nation requested support on certain issues pertaining to the LCR basin, acquiring funding for proposed infrastructure projects, and keeping open the option of utilizing the Upper Basin water in Window Rock, as stated in the Navajo-New Mexico settlement.

Hayes emphasized that the water settlement needs to be considered by the 112th Congress while United States Senator of Arizona Jon Kyl is still in office. Kyl, who has actively encouraged parties to reach a water settlement, will be leaving at the end of 2012. If the water settlement is not addressed before he leaves office, there is a slim chance that it will be addressed again. Hayes would like to negotiate a solid settlement by early 2012.

At the end of the meeting, Navajo Nation representatives asked DOI to protect the Navajo Nation's water rights to the full allocation of the 29,000 acre-feet of water from the CAP NIA through 2030 for a future Colorado River Settlement. Previously, the Navajo Nation Council approved the Northwestern Arizona Indian Water Rights Settlement in November 2010, which included this amount and an additional 2,000 from other supplies, but resolution of the Nation's Colorado River claims, is no longer part of the settlement.