Winslow receives $488,000 to expand the Standing on the Corner Park 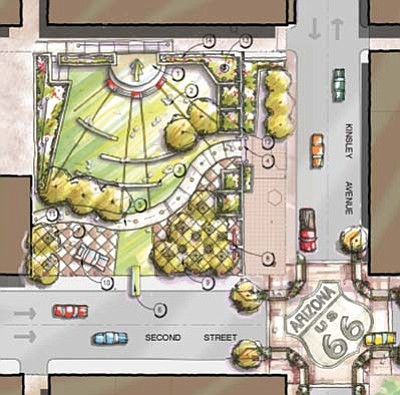 Submitted Photo<br> The above picture shows the plans for the changes that will be made to the existing area. Construction will start once the money is given out.

WINSLOW, Ariz. - Winslow is quickly becoming a huge draw for anyone interested in Route 66. The addition of the Standing on the Corner was just the beginning of the draw, and that corner will soon be expanded upon with the addition of the Route 66 Plaza.

Paul Ferris, Rotary President, talked about the additions that will be added when the plaza is build.

"We wanted to create a plaza that honored all of Route 66 not just Winslow, so we named it Route 66 Plaza," said Ferris. "The contents of the park will include a stage toward the north end by the alley, which will be in the form of the classic drive in with a canopy and neon and another focal point will be a walkway that represents all of Route 66 that extends all the way from the east wall of the old Rasco building, which would have an arch built into. Above that arch would be a mural of Chicago, the beginning point of Route 66 and then on the west wall would be a mural of Santa Monica Pier, where Route 66 terminates and in between would be medallions that would represent all the cities that route 66 spans."

In late 2007 the estimated cost for the entire project totaled one million dollars. With such a high price tag, the city had to find other ways to fund the project. This is where Sharleen Fouser of the Historic Route 66 Association of Arizona came into the picture.

"I work for the Historic Route 66 Association of Arizona and our mission is to preserve, promote, and protect Route 66 across Northern Arizona," said Fouser. "And in 2009 the route was designated an all American road under the federal highway byway program."

This designation opened up the possibility of grants being given out across Arizona.

"What I like about this is that it opens up for people to apply for Federal Highway Grant Funds that are allocated to the byway program," said Fouser. "So I've been looking at our local communities in Arizona to locate projects that meet the criteria for these grants."

The grant gave the city of Winslow just about $488,000 for the project. It was required the city match 20 percent of the money given, so the total amount that has been received is $621,000.

Although Fouser may be the figure head of the grant, she says that receiving it would not have been possible without the members of the community being so helpful.

"Its also important to know that the effort to establish the park and the creative ideas came from members of the standing on the corner community," said Fouser. "They were recognized for their vision of the project, and it was so easy for me because we already had the projected budget, and we already knew what items had been completed so we were able to put together a really comprehensive package for the grant because of the groundwork that was already done by the community."

The plaza also offers the promise of use by the community for other events.

"There are going to be a lot of really cool things," said Fouser. "One of the big activities that they've started in Winslow is they have a program, I believe on Friday nights, all summer long. And this will provide a venue so they can expand that program, as well as keep tourists in the town a little longer. So it's going to be a wonderful community venue as well as adding to the Route 66 experience."

Ferris agrees that the project will only bring good things to the community of Winslow.

"It will help with the revitalization of downtown," said Ferris. "It would serve to enhance the visitors experience of the standing on the corner park, and strongly emphasize the importance of Route 66 and why Winslow was originally developed in the first place."

The project not only promises to draw more Route 66 enthusiast, as well as Eagles fans, but it will greatly improve the look of the already famous corner, and the surrounding downtown area