Standing on the corner festival returns for 13th year 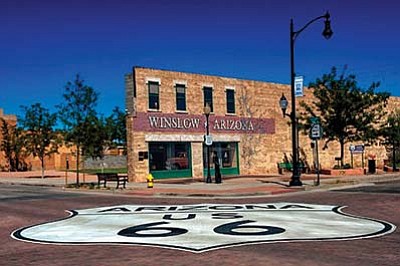 Submitted photo<br> This familiar intersection is the namesake for the upcoming festival that is sure to draw crowds.

WINSLOW, Ariz. - The city of Winslow continues to celebrate its heritage with the 13th Annual "Standin' on the Corner" Park Festival. This year the festival will be held this upcoming Friday and Saturday in downtown Winslow on Historic Route 66 (Second Street) and Campbell Street behind the historic Hubble Trading Post.

This year's schedule of events includes headliners Hotel California, A Salute to the Eagles, as well as Mogollon, Arizona's Best Country Rock Band. Hotel California will be featured on Saturday night, at 9 p.m. while Mogollon's performance is scheduled for at 10 p.m the same night.

The festival will begin at 11 a.m. Friday morning with an amateur talent show and music starting in the afternoon. People of all ages are encouraged to enter the talent show and show off their talents. Other performances on Friday will include Larry Silby, Tommy Dukes, and Hard Knocks Band.

The celebration kicks off again Saturday at 11 a.m. with Winslow Stars National Dance Team. The event will feature lots of food, arts and crafts, clothing, a kids corner and other vendors will available. Featured performers on this day include the Flagstaff Light Opeara Co. Theater, the Standin' on the corner auction, and A Boy Named Sue.

The well-known single "Take It Easy," written by Glenn Frey and Jackson Browne, became a hit in the 1970s for The Eagles and put the community of Winslow on the map. The verse "Standin' on a corner in Winslow, Arizona" draws visitors from far and wide to stand on the famous corner on Historic Route 66.

Dr. Greg Hackler a member of the standing on the corner foundation talked about how the event got started.

"The first standing on the corner festival was Sept. 11, 1999 and we had the festival only because we were opening the park, it was an unveiling of our statue and the mural," said Hackler. "When that happened we had a few vendors there, some volunteer help, and a few bands that volunteered to help, so it was just a nice little downtown gathering. Everybody enjoyed it so much we decided to continue to have it the next year."

The two-story mural by Pugh and the statue by Adamson depict a 1970s-era man standing on the corner wearing jeans, boots, shirt and vest with a guitar standing on the toe of his boot, giving life to the lyrics, "Well I'm standin' on a corner in Winslow, Arizona, such a fine sight to see."

A unique facet of the park includes inscribed bricks sold by the Standin' on the Corner Committee, allowing purchasers to have a permanent spot on the corner in Winslow, Arizona. The sale of these bricks have made the building and upkeep of this park possible. People are encouraged to purchase a brick, a mural print, a mini bronze sculpture or other "Standin' on the Corner" Park merchandise.